When the 737 MAX, built in Renton, Wash., entered revenue service on May 22, 2017, it came with promises of better fuel efficiency, economics, environmental standards and passenger comfort.

A year later, customers say the airplane is living up to those promises.

“Our customers have been doing amazing things with the MAX, launching new routes and providing trans-Atlantic service,” said Randy Tinseth, Commercial Airplanes vice president of Marketing. “They’re also finding the airplane’s fuel efficiency to be as promised, and in some cases, even better.”

For instance, flydubai says it has seen fuel efficiency numbers that surpassed the promised target, along with less disruption and lower maintenance costs. Hainan Airlines says fuel efficiency has increased significantly with the MAX compared to the Next-Generation 737.

“The MAX is so efficient that, in some cases, it is even taking the place of widebody service,” Tinseth said. “Aerolineas Argentinas replaced its four-times weekly A330 service from Buenos Aires to Punta Cana with daily MAX service, a route that covers 3,252 nautical miles (6,023 kilometers).”

At least 6.5 million people have now flown on a 737 MAX, with 130 airplanes in the world fleet. While the airplane’s schedule reliability stands at 99.4 percent, MAX program leaders say there’s still work to be done.

“Our goal is to bring the MAX up to 99.7 percent reliability by the end of this year, and we’re confident of getting there,” said Keith Leverkuhn, 737 MAX vice president and general manager. “All of our employees who’ve had a hand in bringing the MAX to market can be incredibly proud of what this airplane has done in a short amount of time.” 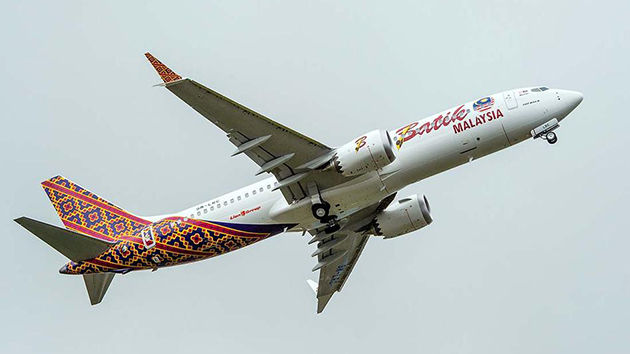 The first revenue flight of the 737 MAX took place on May 22, 2017, by Malindo Air. The airplane is seen here in Batik Air Malaysia livery. (Boeing photo)