Tyler Pettersen grew up wanting to be just like his dad, Scott, who worked for Boeing on the 747 for his entire 39-year career, retiring in 2016.

“He spent 39 years in the same Body Structures section on the 747 -- his heart and soul was there with what he loved doing most,” Tyler said. “He did everything from just general bar line work to being a team leader, which is the position that he would hold until he retired. He loved helping people. He loved bringing people to realize what they were really capable of.”

When Tyler joined Boeing in 2007, he was fortunate enough to be placed in the 747 Body Structures team – just a few shops away from his father. On his first day on the shop floor a manager had a message for him: “Son, you’ve got some big shoes to fill!” referring to Scott’s reputation.

During Scott’s tenure, he was rewarded with a personalized tool box as a thank you for delivering several 747s in impeccable shape. Scott used that toolbox daily – until he finally passed it down to his son.

“On his last day of work, he walked over to me and handed me the keys to the tool box. He wanted to pass it as a symbol of his hard work and dedication to what he had accomplished during his career for our family,” Tyler said. “To me, this was more than just a tool box. It was his legacy. A legacy I will cherish for the rest of my life and hope to pass down to my kids someday.”

Tyler uses that same toolbox every day for his work on the 747-- an airplane he now associates with family.

“To me, the 747 -- it’s a legacy type of thing within my family. My dad started on it, he retired on it. I started on it, I'm going to end on it -- I want to finish it out to see out what he started,” Tyler said.
Later this year, Boeing will deliver its final 747, ending a production run that began in 1969. 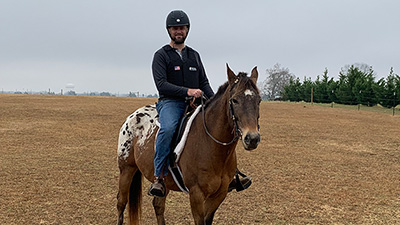