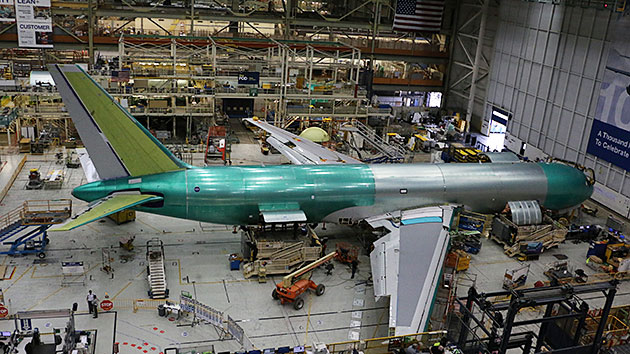 A 767 on the assembly line in Everett, Washington.

Boeing delivered its final 767 passenger airliner to Kazakhstan’s Air Astana in 2014. To then make room for the 787, the twin-aisle program gave up factory space for a smaller area. A natural end to a successful airplane program seemed near.

Today, the 767 keeps rolling off the assembly line -- as a freighter and a tanker. It recently began upping its monthly output from 2-1/2 to 3 airplanes per month. Last week, the 1,201st airplane, which will be the first to deliver at the new rate, was loaded into final assembly.

That would put the 767 in continuous operation for nearly nine decades.

On any given day in Everett, Washington, a FedEx Express and a United Parcel Service freighter occupy Boeing flight-line stalls, awaiting test flights. Among them are a half-dozen U.S. Air Force tankers undergoing similar preparation. All 767s.

Boeing to-date is under contract with the U.S. Air Force to build 67 KC-46A aerial refueling tankers. The next-generation aerial refueling aircraft eventually will replace 179 of the service’s 416 KC-135 tankers. International customers also are submitting or considering orders for the 767 derivative.

The 767 remains dependable and durable. Even with the jet nearing 40 years old, maintenance service and repairs prove relatively uncomplicated.

“You can get parts anywhere in the world for them,” said David Abelson, an aircraft technician who has been part of the program for nearly its entire four decades. “You don’t have to get different parts. Everyone has them. It’s versatile. I can see this airplane going on for a long time.”