When an engine destined to power a 777 was damaged during shipping and deemed not airworthy, Boeing appeared to have one option: scrap it.

But, the thought of reducing a highly sophisticated machine to a pile of recycled metal -- especially the last Pratt & Whitney engine that would power the 777-200 — affronted Jeff Austin’s sensibilities.

“It was a tragic situation. Something good had to come out of this,” said Austin, a Propulsion Systems manager who worked on the 777 program at the time. He suggested donating the engine to a school to help aspiring aerospace workers fulfill their dreams.

The Pratt & Whitney 4074D engine is now providing valuable hands-on experience to students at South Seattle College, which offers the largest aviation maintenance technology program in Washington state. The college prepares about 80 graduates a year to certify for their Federal Aviation Administration airframe and powerplant license.

“Giving us fantastic technology that’s new and modern and that we can learn how to work with and fix is the win-win situation,” said Sherry Loeser, a student who hopes to work “anywhere” in aviation.

“It’s setting up the future of aviation mechanics and it’s wonderful that Boeing would donate something like that to us,” she said.

The donation required nearly two years of coordination between several business units at Boeing, the insurer and South Seattle College, which invested sweat equity to help obtain the engine. At nearly 16,000 pounds (7,258 kilograms) and about 9-1/2 feet (nearly 3 meters) in diameter, the mammoth motor requires a special stand. When Boeing offered to provide a damaged stand, students promptly stepped up to repair and paint it.

“This is a great, great example of The Boeing Company, our Technical Advisory Committee, employers who hire our students and higher education working together to provide a skilled, talented work force,” college President Gary Oertli said at a Feb. 29 event celebrating the donation.

Rob Thayer, Propulsion Systems director of manufacturing and quality, said everyone involved focused on a common mission. “Let’s inspire others in the local community.”

“I really like aviation,” said Brian Passeau, who graduates in March, works in 737 Final Assembly and hopes to leverage his maintenance certification into a better job at the company.

“This engine teaches me a lot about troubleshooting and is giving me a base understanding of what to expect and apply it at Boeing,” he said.

By Paul McElroy and Jordan Longacre 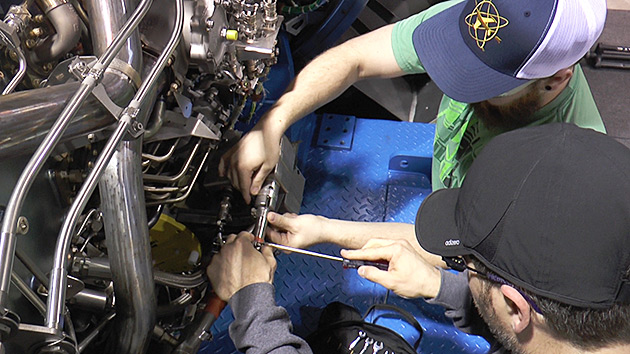 South Seattle College students say working on a modern jet engine is a boon to helping them earn their aircraft maintenance certification and get a job.