Four hours after its historic 10:09 a.m. departure from Everett, Washington, Boeing’s newest and longest twin-aisle airplane, the 777X, successfully completed its first flight when it landed to the cheers of a crowd at Boeing Field in Seattle.

“The 777X flew beautifully, and today’s testing was very productive,” said Capt. Van Chaney, 777/777X chief pilot for Test & Evaluation. “Thank you to all the teams who made today possible. I can’t wait to go fly your airplane again.”

Chaney and Chief Pilot Craig Bomben flew the airplane from Paine Field in Everett, over Washington state. During the flight, they worked through a detailed test plan to exercise the airplane’s systems and structures while the test team in Seattle monitored the data in real time. The airplane, WH001, will now undergo checks before resuming testing in the coming days. It is the first of four dedicated 777-9 test airplanes.

Employees who witnessed either the takeoff from Paine Field in Everett, Washington, or the Boeing Field landing shared why they turned out on a chilly, overcast weekend to be a part of it.

“It’s cold, yes, but it’s very heartwarming to see our product that we have worked on so hard just take flight,” Diego Castano, 777/777X account manager for Customer Engineering said during the morning takeoff. “We can produce incredible machines, beautiful machines that actually bring the world together.”

Brent Snickers was determined to see it when he arrived with his camera at Boeing Field for the landing. The 12-year Fabrication employee in Auburn, Washington, works on a team that supplies paint packages to the 777X program. He had waited with thousands of others in the rain Friday to see the takeoff before it was postponed due to strong winds.

“This morning (Saturday) I watched the takeoff on TV, then I got in my truck and hurried up here to watch the landing. It’s a step forward, for the positive, for The Boeing Company,” Snickers said.

Saturday’s flight is the latest milestone in an effort to build the 777X that involves Boeing sites and partnerships in the U.S. and around the world.

“Our Boeing team has taken the most successful twin-aisle jet of all time and made it even more efficient, more capable and more comfortable for all,” said Stan Deal, president and CEO of Commercial Airplanes. “Today’s safe first flight of the 777X is a tribute to the years of hard work and dedication from our teammates, our suppliers and our community partners in Washington state and across the globe.”

The 777X is based on the 777, the most successful twin-aisle airplane ever, and integrates advanced technologies from the 787 Dreamliner. Through advanced aerodynamics, the latest generation carbon-fiber composite wing and the advanced GE Aviation GE9X engine, it is designed to be the largest and most fuel-efficient twin-engine jet in the world.

To build it, Boeing invested more than $1 billion to construct the Composite Wing Center in Everett to manufacture the largest commercial airplane wing the company has ever built for the 777X.

Ed Gillette, 777X Customer Engineering senior manager, called seeing the first flight “a privilege,” and reflected upon the often personal significance for him and other employees.

“I’ve been at Boeing over 20 years, my family has worked for Boeing for more than 40 years. And there are few things as an engineer that give me more pride than seeing a flying machine that makes the world a better place,” he said. 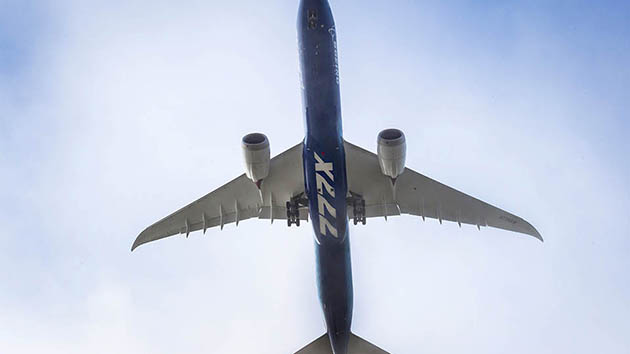 The 777X climbs smoothly into the air over Everett, Washington to begin its first flight. 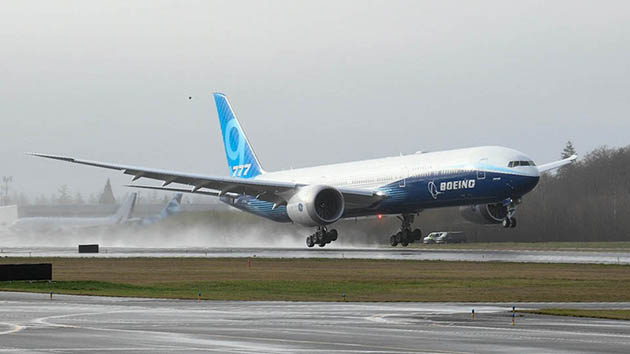 The 777X takes off from Paine Field in Everett, Washington. 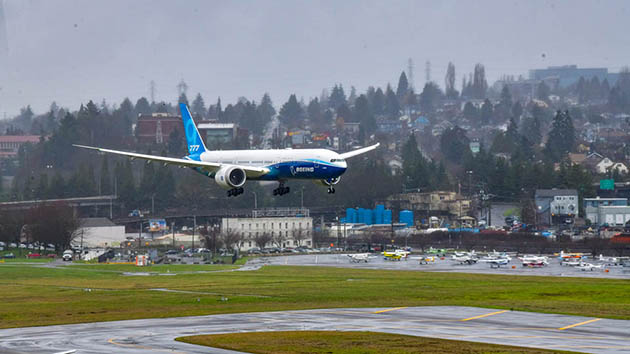 The 777X approaches Boeing Field in Seattle for a landing after nearly four hours in the air over Washington during its first flight.