During testing, the frame will be positioned over the top of the fuselage. A series of eight hydraulic jacks will work simultaneously to lift the 245-foot long frame 79 feet in the air, allowing the airplane to roll into the space below.

The steel frame is entirely blue except for the last beam, which was painted red, white and blue, and signed by all those who contributed to the project. The beam signifies that no significant injuries occurred during the massive construction effort.

“Testing on a full-scale airplane verifies the design strength of the airplane and its ability to carry loads, as well as the accuracy of the analytical model used in its design,” said Richard Hepler, Northwest Structures Lab capability leader for Everett. “In this case, the requirement arises from the advanced design features incorporated in the 777X wing.”

With construction complete, the Boeing Test & Evaluation (BT&E) team will now begin adding load systems to the frame. When that is completed, the total weight of the reaction frame will be 2 million pounds.

“During testing, the frame will lift the 777X wings to see a 26-foot bend in the wings,” said Mike From, BT&E 777X Test Program manager.

Testing is scheduled to last one year. The first 777-9 airplane, which is intended for static test in the frame, is in production now, as is the first flight test airplane. Deliveries to customers are expected to begin in 2020.

By Karen Crabtree and Kenn Aguilar 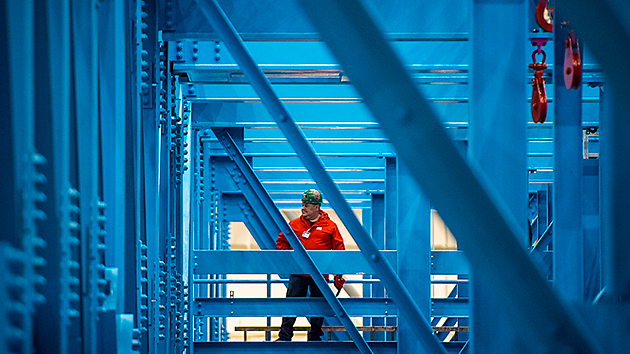 The largest steel beam structure built for Boeing static test -- weighing 1.6 million pounds -- was just completed and turned over to Boeing. The frame, once loaded with additional test equipment, will be used for 777X static testing. (Marian Lockhart photo)