With roughly 10,000 Boeing employees having ties to the University of Washington and Washington State University, the annual game between the two schools is one of the biggest college football rivalries in the Pacific Northwest — and among employees vying for bragging rights.

Boeing sponsored this year’s game, the 108th Apple Cup, which the University of Washington Huskies won 45-10 on Nov. 27 in Seattle. Events included giveaways of 10,000 promotional hats and scarves, a special Boeing dedication from the University of Washington band during halftime, and a Boeing contingent, led by Commercial Airplanes CEO Ray Conner, overseeing the coin toss for the game's opening kickoff.

A week before the Huskies squared off against the Washington State Cougars, however, a group of nearly 50 Boeing scholarship recipients, interns and recent hires with ties to both schools put aside their rivalry for a unique experience. Boeing organized a VIP lunch and tour for them at the University of Washington, where this year's game was played.

The scholarship recipients are college students who are excelling in fields of study related to aerospace and selected by their schools to receive scholarships provided by Boeing.

Jermaine Hickles-Benton, a senior at the University of Washington, hopes to join Boeing as a process analyst or industrial engineer once he graduates.

“I like to analyze systems and processes in order to look for metrics such as efficiency, throughput and waste,” Hickles-Benton said.

Hickles-Benton said he's entertaining offers from other companies but hopes to follow in the footsteps of his grandfather and father and work for Boeing.

“I would love to do community relations, planning some of the huge events that Boeing does all the time … playing an important role and giving back,” she said.

The company has strong partnerships with both schools, having provided millions of dollars in charitable contributions and scholarships over the years. The schools also have provided a pipeline to some of the best and brightest minds throughout the company.

“[The University of Washington] has been an important partner to Boeing since we collaborated nearly 100 years ago to build one of the very first wind tunnels in the world,” said Todd Zarfos, a Husky alum and vice president for Engineering Functions and the Washington State Design Center.

“We have long and deep ties with WSU,” said Craig Bomben, a Washington State graduate and Boeing vice president of Flight Operations, “and we’re honored to give hard-working students the opportunity to pursue a career here at Boeing.”

By Tom Kim and Jordan Longacre 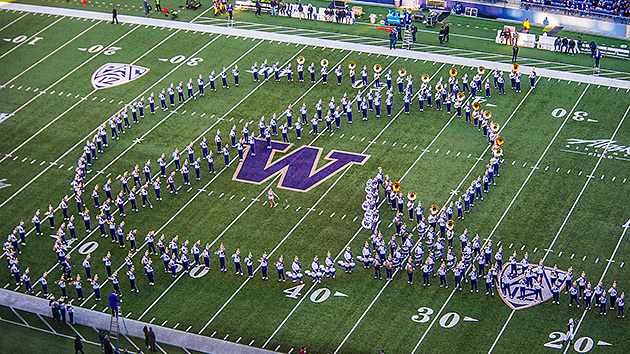 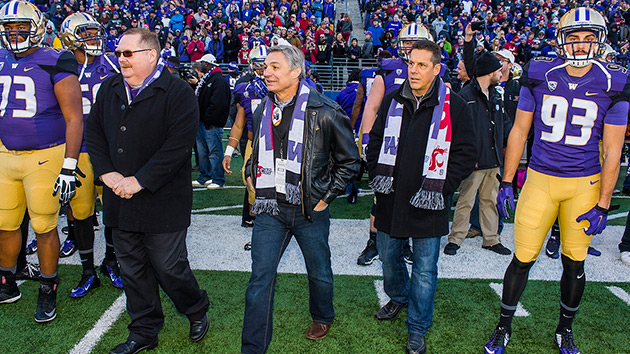 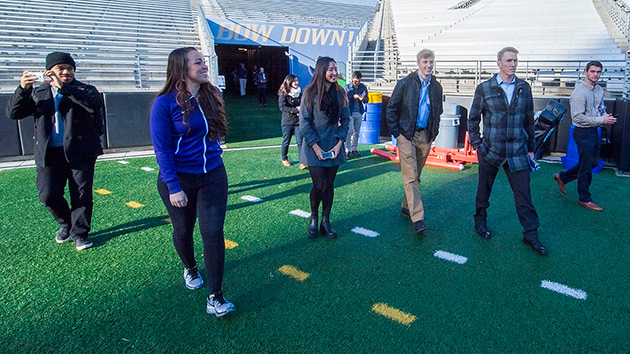 A University of Washington athletic department staff member leads Boeing scholarship recipients, interns and new hires on the field at Husky Stadium in Seattle as part of a tour before this year's Apple Cup game.