Rich Sand remembers starting work at Boeing’s Auburn site 15 years ago, not long after the World Trade Center attacks on 9-11. Layoffs were affecting Auburn and all of Boeing. “Morale was down. It was a dismal feeling,” he says. Gradually, things improved: Work returned. Employees came back. New manufacturing equipment was purchased.

He feels fortunate to have the only 7-axis lathe of its kind in Boeing. And when he hears that Boeing Auburn is building a new facility dedicated to improving the skills of existing employees and training new ones, he’s excited: “The fact that Boeing is doing this, spending on a new building for training, tells me that Boeing is interested in Auburn’s future. It makes me very optimistic.”

Boeing Auburn is celebrating the start of construction on its first new building in nearly 25 years, a multi-use facility that will be, as Sands says, dedicated primarily to enhancing the skills of its more than 5,000 employees. To be called the Workforce Readiness Center, the building represents a critical piece supporting the site’s central role in fabricating parts for Boeing Commercial Airplanes production now and into the future.

“At a time Boeing is watching its spending very carefully to improve our competitiveness, this investment is significant,” said Jack Meehan, Boeing Auburn’s site leader. “Our employees, and the wider community in Auburn and across the South Puget Sound, should see this as both a recognition of the important, outstanding work we do here and a vote of confidence in our future.”

The new facility will be a centerpiece of that strategy. It will have space for:

The Center’s 71,000 square feet also will be the new home for Auburn’s medical clinic. The clinic will be moving from its current location at the south end of the site. In addition it will also become headquarters for IAM/Boeing Joint Programs in the south Puget Sound. Until now, Joint Programs has leased space outside the Auburn site.

That old clinic building will be torn down after the clinic moves to make room for a second new building, to be called the Operations Readiness Center. The Operations Center will become the focal point for maintaining the Auburn site, and it will be a warehouse for critical spare parts. The two new buildings will replace a World War II-era structure that will be torn down after the new buildings open. Construction is scheduled to begin on the second building in 2018.

The entire project represents a significant investment by Boeing in Auburn and the South Puget Sound. Just as Boeing this year recorded a century in the aviation industry, Auburn celebrated its 50th anniversary in 2016 as a foremost internal supplier to the company’s commercial airplanes. 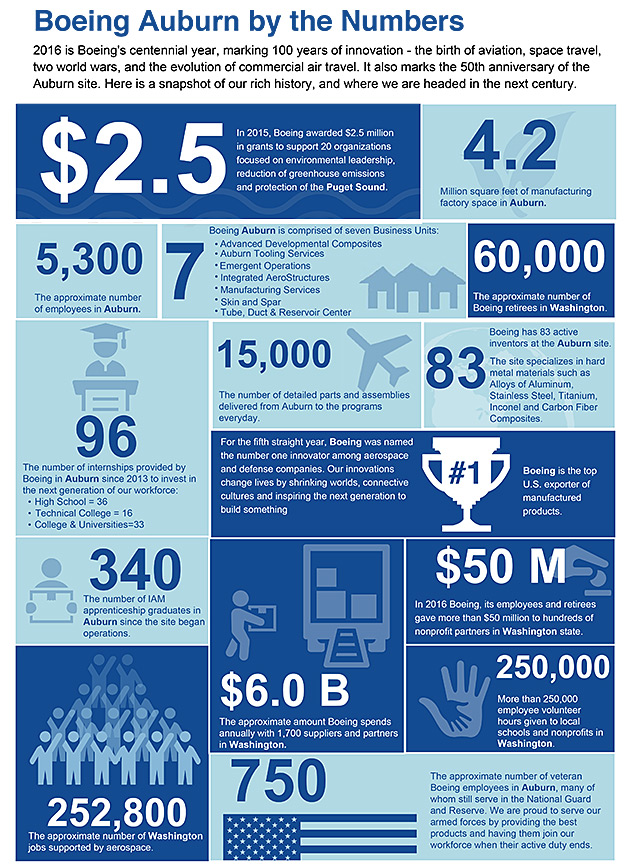