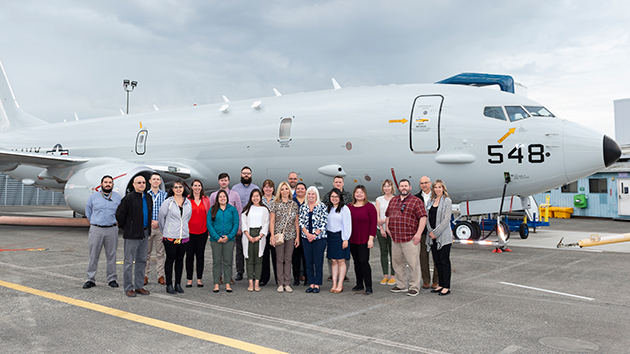 The P-8 Commodity and Services team stands in front of a U.S. Navy P-8A Poseidon before its delivery. The aircraft is the 87th production aircraft delivered to the Navy.

Boeing Defense employees in the Puget Sound are seeing quadruple after Boeing and the Defense Contract Management Agency signed four Material Inspection and Receiving Reports during one recent week, clearing the way for two P-8A Poseidon and two KC-46A tanker aircraft to fly to their respective customers.

The last time Boeing delivered this many military aircraft from the Pacific Northwest was during the peak of the KC-135 program, more than 55 years ago, according to Boeing Defense, Space & Security.

“There is a real sense of accomplishment among our team,” said Jared Oustlund, a KC-46A industrial engineer at the Military Delivery Center in Tukwila, Washington. “There have been challenges on the way, but we have listened to the customer and remained focused on the goal of delivering a quality aircraft.”

Employees at the Military Delivery Center, in Tukwila, Wash. have prepared for the increase in aircraft and deliveries for months. A year ago, the center had three aircraft at the facility and was averaging one and a half deliveries per month. To accommodate more aircraft deliveries, a team formed over a year ago to ensure that the right people, process and equipment were in place to support the increased deliveries.

“The teams at the center have to coordinate closely in order to conduct all the ground and flight tests prior to delivery,” said Ken Wilson, senior manager for the P-8 program at the delivery center. “It is imperative that we work as one team, with our Defense Contract Management Agency customer, to deliver these aircraft to our Navy and Air Force customers.”

To meet the delivery requirements of both programs, the space at the center had to be reconfigured, and a new blast fence installed. Today, the center can hold up to 14 aircraft, up from four previously. Additional personnel, equipment and support staff also were added.

The first of the week’s four P-8A deliveries was the ninth aircraft for the Royal Australian Air Force, departing on July 29 for its new home base in Edinburgh, Australia.  Next to fly away was the 87th P-8A for the U.S. Navy, departing July 30. The two KC-46A tankers flew away on August 8 headed to Pease Air force base in Portsmouth, NH.

“A lot goes into the final aircraft checks and test flights prior to delivery,” said Tim Peters, vice president and general manager of the Commercial Derivative Aircraft division headquartered at the Developmental Center in Tukwila, Wash. “I am very proud of the team. We have a bright future as we continue to focus on executing on our franchise programs and delivering the most capable aircraft.” 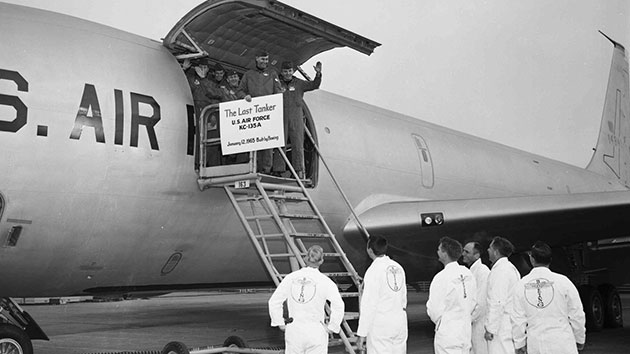 Before Commercial Derivative Aircraft employees delivered four military jets from the Puget Sound region in one week recently, that hadn't happened since the height of the KC-135 program. This photo shows the final KC-135 being delivered in 1965.