Children ranging from kindergarten to college filled the Great Gallery at the Museum of Flight in Seattle, Wash. to celebrate a huge new investment in their future. With a smile on his face, Commercial Airplanes CEO Ray Conner announced that Boeing is providing $15 million to create the Boeing Academy for STEM (science, technology, engineering and math) Learning at the Museum of Flight.

An additional $15 million match was announced by the family of the late Bill Boeing Jr., son of the company founder, bringing the total investment in the Museum of Flight to $30 million.

The academy being created with The Boeing Company's investment represents a vigorous, new STEM-focused education initiative that aims to double the number of students served by the museum's immersive programs over the next two years -- particularly from communities under-represented in STEM fields -- and connect them to fulfilling, in-demand careers.

Washington state leads in creating STEM jobs, but by 2017 an estimated 45,000 STEM jobs in Washington will go unfulfilled due to lack of qualified candidates, according to Washington STEM, a non-profit organization advocating for increased investment in STEM education.

"This academy will help close that gap and we are confident the Museum of Flight is the perfect partner to help us expand the pipeline of diverse, talented young STEM professionals in Washington and beyond," said Ray Conner, president and CEO of Boeing Commercial Airplanes. "Whether they choose aerospace or not, we're happy to provide the opportunity, access and education that will enable them to develop their talents and grow their skills."

The Boeing Academy for STEM Learning at the Museum of Flight will significantly expand STEM opportunities for Washington's youth. It is expected to double by 2017 – and double again by 2019 - the number of students served by the museum's educational program.

Additionally, at least half of those students will be young women, students of color or economically disadvantaged, which makes it possible for young people across the spectrum of our community to develop their talents and share in the promise of a better future.

"It allows us to reach more kids, it allows a lot more kids to be involved in programs that we've already done and to expand the program dramatically to reach underserved audiences," said Doug King, CEO at Museum of Flight, about Boeing's investment. "What we find in our immersive programs at the high school level is that two-thirds of those kids end up going into STEM careers, and more than half of those are aerospace related."

Meanwhile, June Boeing represented her late husband, Bill Boeing Jr., in announcing the $15 million match. "He cared so deeply about the educational mission of the Museum," she said of her husband. "He would smile most brightly when in the midst of our eager young learners."

As a final, celebratory cap to the occasion - students and attendees launched paper airplanes into the air -- celebrating the takeoff of a new program that will inspire young minds for years to come. 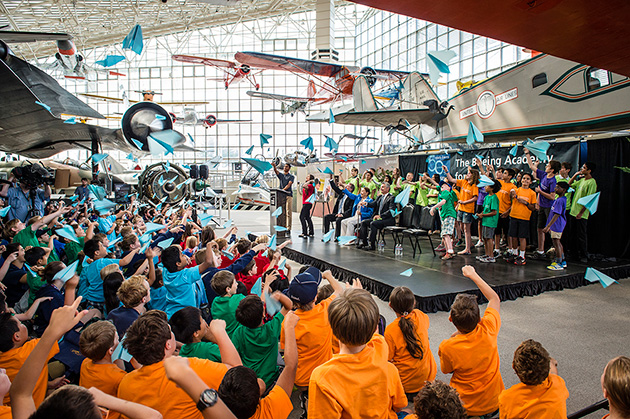 Enthusiastic children toss paper airplanes to celebrate the announcement of the Boeing Academy for STEM Learning at the Museum of Flight near Seattle, Wash. 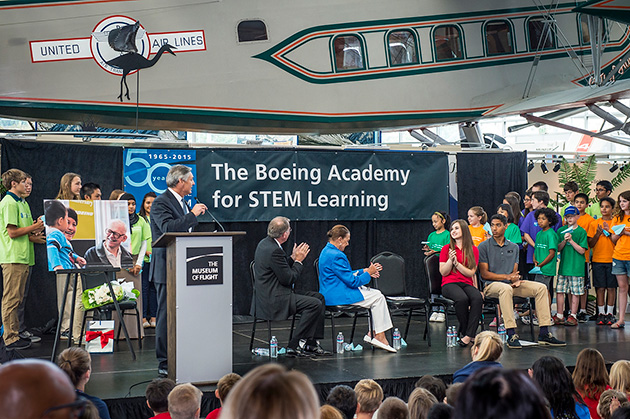 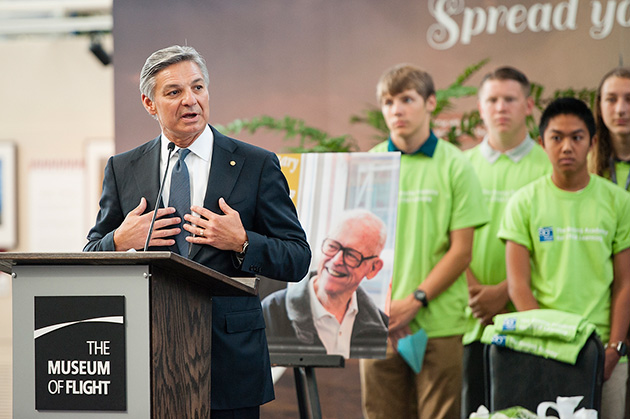 Commercial Airplanes CEO Ray Conner announced Boeing's investment by explaining it is "an opportunity to invest in our children and our region's future economic health".