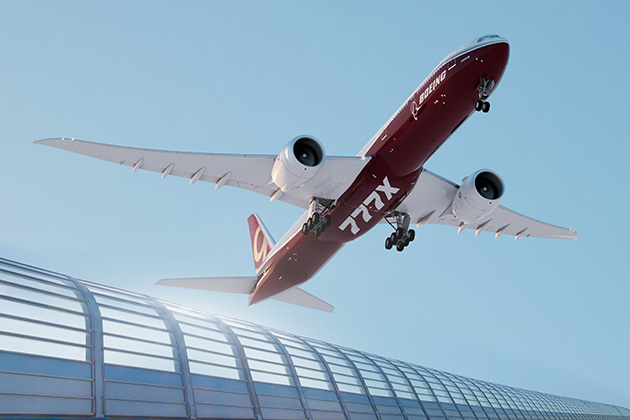 The 777X team has completed the firm configuration of the 777-9, the first member of the 777X family to be developed.

The Boeing 777X team reached this significant design milestone after working closely with airline customers and key suppliers to optimize the configuration of the new airplane.

The 777X family includes the 777-8 and the 777-9. Both provide significant range, payload and fuel burn advantages compared to the A350.

"It's great to see the airlines and industry team side-by-side with us as we achieve this important milestone," said Bob Feldmann, vice president and general manager of the 777X program, Boeing Commercial Airplanes. "The team has followed a disciplined process to complete all of the requirements for this stage of the program."

The firm configuration milestone marks the completion of configuration trade studies required to finalize the airplane's capability and basic design. Wind tunnel test results, aerodynamic performance and structural loads are also evaluated to ensure the airplane meets requirements. This allows the 777X team to begin detailed design of parts, assemblies and other systems for the airplane. As detailed designs are completed and released, production can begin.

"The program is right where we want it to be," added Feldmann. "We have an airplane and production system that are on track and on schedule, and we remain laser focused on meeting our commitments to our customers."

The 777X will be the largest and most efficient twin-engine jet in the world, with 12 percent lower fuel consumption and 10 percent lower operating costs than the competition. In addition, the 777X will bring cabin innovations and improved levels of passenger comfort.

The 777X program has received orders and commitments for 320 airplanes from six customers worldwide. Production in Washington state is set to begin in 2017.