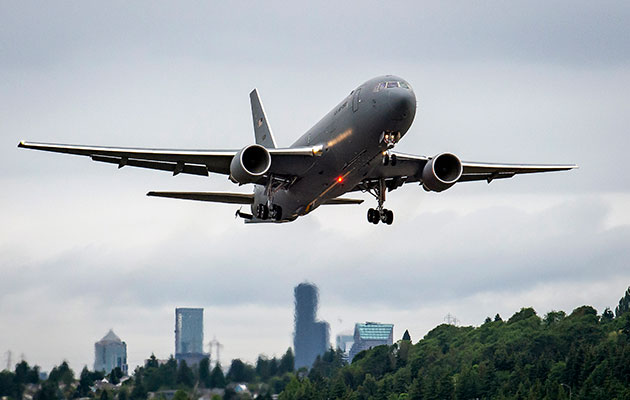 The latest tanker delivered to the U.S. Air Force takes off from Boeing Field.

Boeing worked with the Air Force the past several months to prepare the base for delivery of the KC-46, standing up the warehouse, stocking shelves with spare parts, staging ground support equipment and training local airmen.

The Washington-built KC-46A Pegasus is a widebody, multirole tanker that can refuel all U.S., allied and coalition military aircraft compatible with international aerial refueling procedures. Boeing designed the KC-46 to carry passengers, cargo and patients. The aircraft can detect, avoid, defeat and survive threats enabling it to operate safely in medium-threat environments.

Boeing began developing the KC-46A for the Air Force in 2011 and delivered the first tanker in January 2019. Boeing has now delivered 34 tankers—21 to McConnell Air Force Base, seven to Pease Air National Guard Base, five to Altus Air Force Base and one to Seymour Johnson Air Force Base.