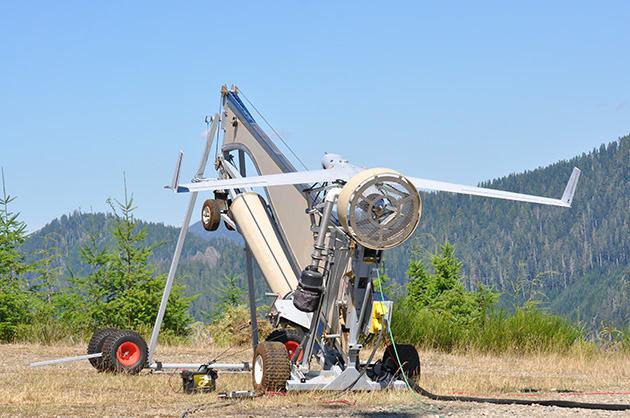 While more than 625,000 acres of wildfires burned throughout the Pacific Northwest, crew members of the Insitu Rapid Response team launched a ScanEagle unmanned aircraft into the hazy skies above the Paradise Fire in Washington'sOlympic National Park. Insitu is a wholly owned subsidiary of The Boeing Company located in Eastern Washington. The event marked the beginning of an operational demonstration designed to show how unmanned aircraft technology can be a powerful partner in the fight against wildfires.

"This and other planned unmanned aircraft systems demonstrations will serve to guide our policies, procedures and requirements for the safe, phased integration of UAS in support of wildfire management," said Mark Bathrick, Director, Department of the Interior, Office of Aviation Services. "These demonstrations are part of a larger interagency strategy aimed at employing UAS to provide firefighters on the ground with time-sensitive information that will give them the highest level of situational awareness and support possible."

"We are honored to support the individuals who are risking their lives to protect the natural resources endangered by wildfires in the Pacific Northwest," said Insitu President and CEO Ryan M. Hartman. "This exercise demonstrated our ability to collect, process and deliver information that helps fire officials achieve better outcomes."

ScanEagle flew within an emergency certificate of authorization (ECOA) issued to the Department of Interior from the FAA that permitted its operation within the confines of the temporary flight restriction.