Two donations totaling $100,000 to provide immediate aid and relief to victims of the deadly March 22 mudslide in Snohomish County, Wash., were announced Wednesday by Boeing. Relief efforts are expected to continue for months in the small town of Oso, located about 50 miles northeast of Seattle.

“The Oso mudslide is a terrible tragedy that’s had a deep impact on all of us at Boeing and our Washington state community,” said Commercial Airplanes President and CEO Ray Conner. “We at Boeing want to help our employees and neighbors who have been directly touched by the mudslide. Know that our thoughts are with you during this difficult time.” 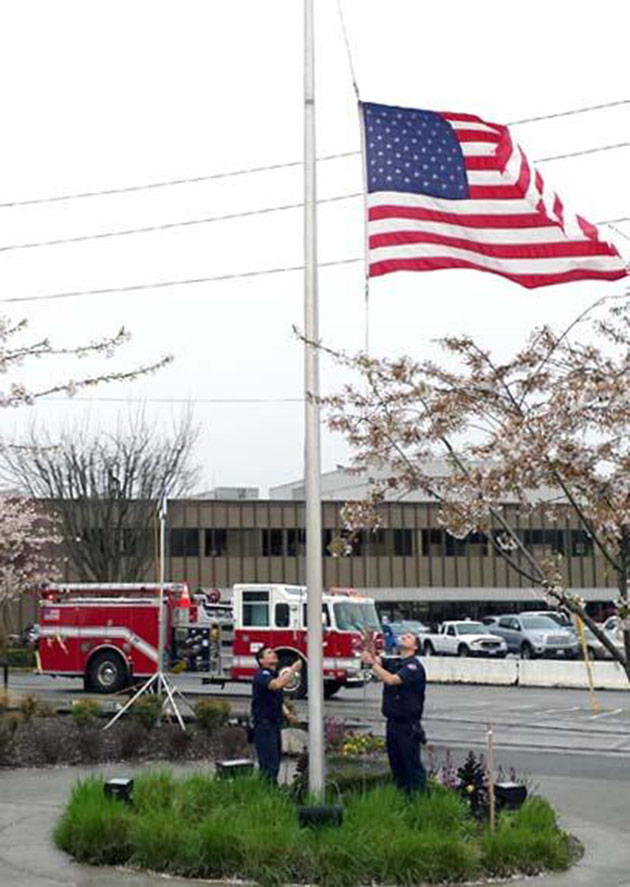 Boeing firefighters Laurence Opiniano (left) and Eric Gandee lower the U.S. flag to half-staff in Renton, Wash., to honor the victims of the March 22 mudslide in Snohomish County, located north of Seattle.

Boeing employs about 40,000 people in Snohomish County. The Employees Community Fund (ECF) of Boeing Puget Sound will give $25,000 to the disaster relief fund of Cascade Valley Hospital in Arlington, Wash. This grant is being supplemented by an additional $75,000 donation from the company.

Of that company donation, $50,000 is earmarked to United Way of Snohomish County and $25,000 goes to the Snohomish County chapter of the American Red Cross. The Employees Community Fund (ECF) also has pledged to match individual donations to Cascade Valley Hospital for the relief effort up to an additional $25,000. As of March 27, the $25,000 ECF match threshold has been reached.

Employees in the Puget Sound area also will notice a show of support for the town of Oso.

“Boeing sites across Puget Sound have lowered their flags to half-staff through Sunday out of respect for the citizens of Oso,” Vice President and Chief Security Officer David Komendat said. “We stand with them during this tragic time.”