Chinook Middle School teacher Jennifer Bathelt needed a few extra chairs in her eighth grade algebra class in SeaTac, Wash. during a recent discussion about factoring polynomials. That's because several guests, including Commercial Airplanes president and CEO Ray Conner, had dropped in for a visit. "It brought back a lot of math anxiety for me," said Conner with a grin.

The three CEOs were in the Highline School District to check out the new Chromebooks provided to all 632 students at Chinook Middle School thanks to a technology gift from Boeing. More than 80-percent of the students here participate in free and reduced lunch programs, and many come from immigrant and refugee families. Now, the new devices will allow students to have their own tablets they can use throughout the school year.

The technology provided by Syntonic will allow the students to use online technology, even if their homes don't have Wifi. Alaska Airlines funded a grant to increase the number of girls in computer science classes and enhance interest in tech-related careers.

The students were eager to demonstrate to the gathered CEOs how the new Chromebooks they provided will now help them. "It tells you what you got wrong and then why and how you got it wrong," explained student Dawa Nur.

"I can study and get prepared," added her classmate, Elma Sacic.

Perhaps even more excited than the students, was Susan Enfield, superintendant at Highline Public Schools. "Putting these Chromebooks in their hands, giving them access to technology, it's the great equalizer," she explained as she looked around the classroom. "It puts our kids on an even playing field, not just with kids in Seattle and Issaquah but with kids in Singapore and Shanghai and Berlin."

Conner says providing effective learning tools to students is a critical step in developing the next generation of innovation leaders. "Then you don't lose kids and that's really what we're trying to do - make sure we don't lose anyone," he said. "And this gives everybody an equal opportunity to learn and ultimately be successful down the road." 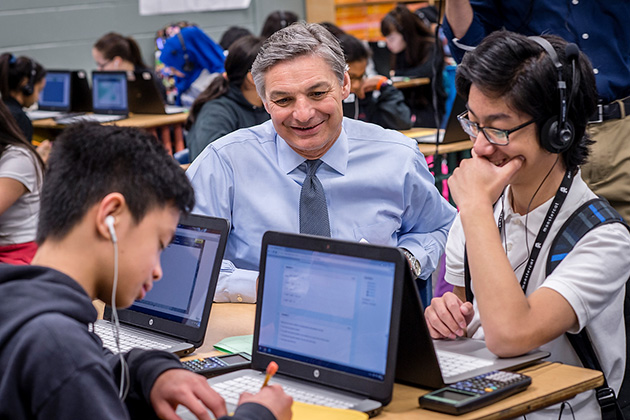 Boeing Commercial Airplanes President and CEO Ray Conner smiles as he looks at the work being done on the Chromebook by student Mason Hap. Eighth grader Johnly Maya works in the foreground 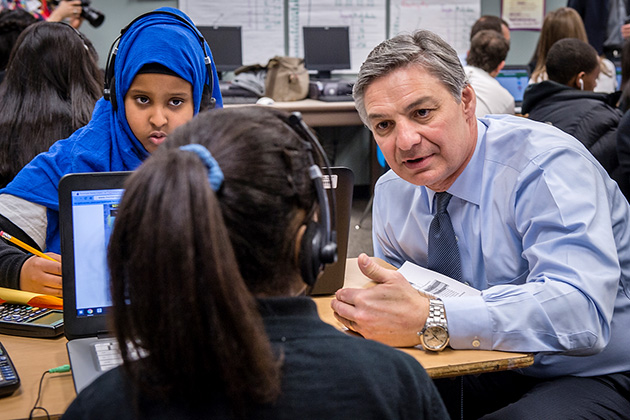 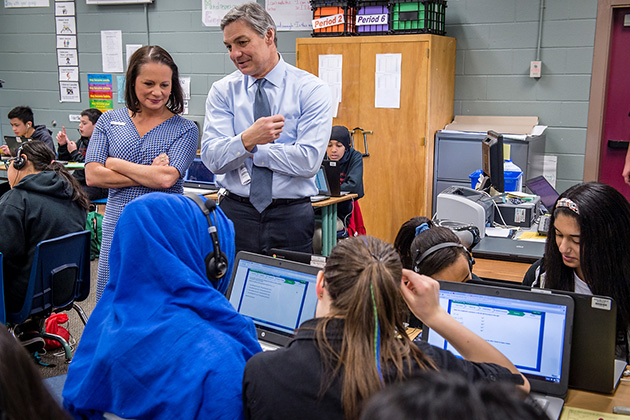