For Tobias Slaton, 2015 will be a year to remember — and the calendar hasn’t even turned to summer yet. In January, the former U.S. Marine began working at Boeing as an integrated Quality Specialist in Everett, Wash., after connecting with hiring managers at a Hire America’s Heroes event. Then, on April 19, Slaton was selected to represent Boeing and throw the ceremonial first pitch at the Seattle Mariners’ Salute to Armed Forces game – a once-in-a-lifetime opportunity for the Mariners fan.

“That was exhilarating,” said Slaton, after a clean pitch over home plate in front of more than 31,000 cheering fans. “I feel nothing but pride to be out here representing the United States Marine Corps, the armed services and Boeing.”

During his moment on the mound, Slaton represented more than 23,000 veterans who work for Boeing globally. More than 11,300 of them are based at Boeing sites in Washington state. Before coming to Boeing, Slaton spent six years in the Marines, including one year in Afghanistan. Additionally, his father, who watched Slaton’s pitch from the sidelines, is a 30-year veteran of the U.S. Navy.

Slaton has already joined the Boeing Employees Veterans Association (BEVA) and says Boeing is a perfect fit for a second career after his military experience. 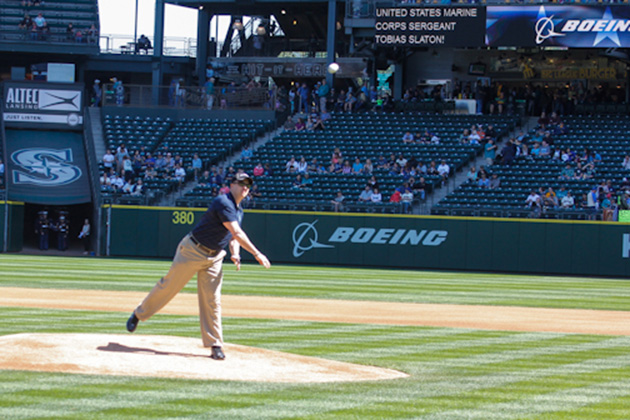 “I like it a lot,” Slaton said of working at Boeing. “The company brings you in and makes you feel very comfortable. It appreciates your experience.”

In addition to Slaton’s family, several leaders from Commercial Airplanes and Defense, Space & Security were on hand to watch the first pitch and celebrate the dozens of military men and women who took to the field before the game.

“Joining a community institution like the Mariners to recognize the service of the men and women in the armed forces is a perfect fit for Boeing,” said Bill McSherry, vice president of State and Local Government and Global Corporate Citizenship for Commercial Airplanes. “Like Boeing, the Mariners are long-term, foundational members of the Washington community, and it’s great to be able to team with them for this great celebration.” 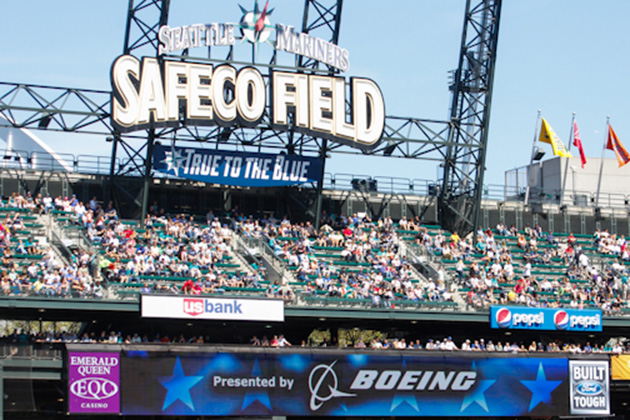 Fans take their seats prior to the Mariners' Salute to Armed Forces game at Safeco Field in Seattle, Wash.. Boeing is the presenting sponsor of the game.

“Veterans are well-trained, disciplined, and obviously care a great deal about contributing to the defense of the nation,” he said. “And that’s what we do on the defense side of the company.”

Boeing is a major sponsor of the Seattle-based Mariners baseball team, and has partnered with them since their inaugural season in 1977.