The social media tag board on the big screen said it all.

Hundreds of Twitter and Facebook posts from nonprofit community groups from across the Puget Sound region of Washington state, sharing their appreciation for their partnerships with Boeing and the investment  the company makes in communities.

It was just one part of a fun-filled event held recently in Seattle where civic leaders, and representatives from community groups and nonprofits came together to celebrate Boeing’s announcement of nearly $10 million in grants to more than 100 local nonprofit groups for 2016.

Bill McSherry, vice president of Government Operations and Global Corporate Citizenship for Commercial Airplanes, praised the groups for their efforts.

“It is work that makes the Puget Sound a smarter, safer, kinder and cleaner place for us to live and work. All of us at Boeing feel privileged to be your partner,” said McSherry.

The Boeing grants were awarded to nonprofit organizations engaged in often life-changing and community improving work a range of fields that include education, the arts, environment, human services and civic engagement.

U.S. Rep. Denny Heck, D-Wash.,. one of several public officials who attended, said of Boeing’s commitment to the Puget Sound and Washington state:

The Boeing community grants are one facet of the company’s ongoing support to the Puget Sound region. In 2015, Boeing, its employees and retirees donated nearly $50 million to a range of causes and sponsorships.  Boeing and its employees also support community programs and causes in other cities where the company has a presence.

“The biggest benefit of partnering with Boeing is it’s just the whole soup to nuts partnership,” said Aaron Clark of Stewardship Partners, an environmental nonprofit group. "They really model what it is to be an amazing partner to sustain us, to make sure we’re sustainable, to make sure that we’re effective and efficient.” 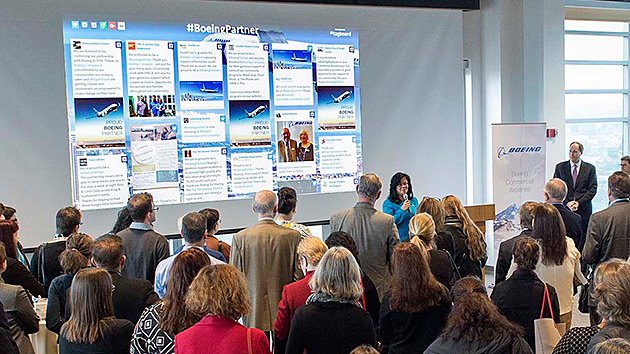 Hundreds of Puget Sound community and nonprofit leaders joined together both in person and on social media recently to celebrate their partnerships with Boeing.