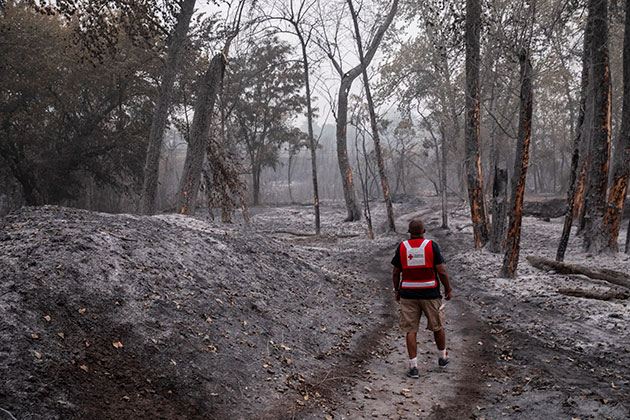 An American Red Cross volunteer surveys damage from wildfires on the West Coast.

Boeing today announced $700,000 in grants from the Boeing Charitable Trust to help local communities with the ongoing humanitarian and environmental crisis caused by wildfires burning along the West Coast of the United States. Boeing is providing $500,000 to the American Red Cross to support its fire relief efforts in Washington, Oregon and California.

“On behalf of Boeing employees across the globe, we extend our heartfelt sympathies to all those impacted by the West Coast wildfires,” said Boeing President and Chief Executive Officer David Calhoun. “As these wildfires have ravaged the Western United States, the American Red Cross has stepped up to answer the call at this critical moment of need, and we are happy to support them in their critical work. Through our partnership with the Red Cross, we will help bring recovery and relief efforts to those who have been displaced – and whose lives have been impacted – by these destructive fires.

Additionally, Boeing is donating $200,000 to provide food assistance in these states where significant numbers of the company’s employees live and work. $100,000 is being given to Northwest Harvest in Washington, and $50,000 apiece to the Oregon Food Bank and Redwood Empire Food Bank in California.

“Thousands of our families, friends and neighbors have been displaced around the west,” said Stan Deal, president and CEO of Boeing Commercial Airplanes and the company’s senior executive in the region. “We are committed to helping them through this exceptionally challenging time.”

Boeing’s grant to the Red Cross will provide shelter, food and essentials for those who have been displaced from their homes due to the wildfires. These funds will also assist in the ongoing evacuation and aid delivery response in impacted communities.

“The Red Cross is working around the clock to help hundreds of thousands of people forced to evacuate from their homes due to the California, Oregon, and Washington wildfires. We have taken extra safety precautions due to the pandemic to ensure people feel safe as we support the communities impacted by the wildfires,” said Don Herring, chief development officer at the American Red Cross. “We are extremely grateful for Boeing’s support, which allows us to provide shelter, food and comfort to help people in need.”

As part of the gift match program, Boeing matches employee contributions to American Red Cross and other eligible nonprofits dollar-for-dollar—up to $10,000 per year per employee. 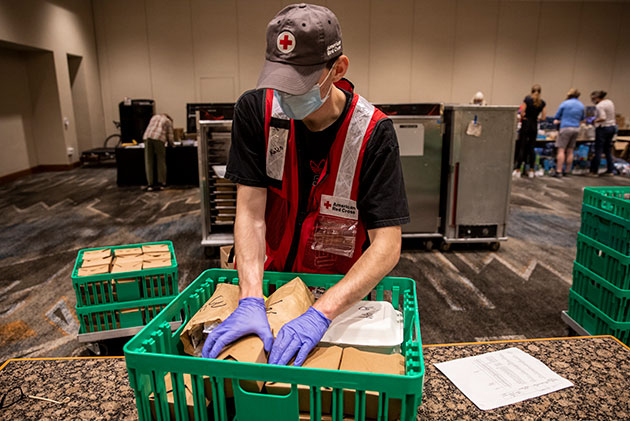