Like many people at Boeing, 777/777X new hire mechanic Oleksandr Shevchuk is passionate about airplanes.

But what makes him – and 30 other recent hires – different is being part of the inaugural class of high school and skill-center graduates joining Boeing through a new accelerated hiring and training program.

"Making it to Boeing wasn't easy," Shevchuk said. "But as the saying goes, hard work pays off, and I'm real excited to be here."

During a high school career day and tour of the Sno-Isle Tech Skills Center in Everett, Wash., Shevchuk caught the aerospace bug. When he graduated this year from high school in Edmonds, Wash., while also attending Sno-Isle Tech, he competed in the Washington state Skills USA Aircraft Mechanic Competition – and won. He finished top 10 nationally in the Skills USA competition.

This all from someone who spoke almost no English when he immigrated to America in 2008. He now speaks, reads and writes in Russian, Ukrainian and English.

"Today's manufacturing tools and processes means our workforce must continually learn and adapt to be successful," said Walt Odisho, vice president of Manufacturing and Safety for Commercial Airplanes. "We can do a better job of attracting top talent and providing opportunities for current and new employees to develop the skills needed to succeed. If we do that, we can extend our reputation as a major hub for aerospace talent while providing great jobs and careers."

Record production levels coupled with worker retirements on the horizon means Boeing expects to hire up to 15,000 people for manufacturing jobs in Washington state through the end of this decade, according to company officials. Boeing also is making investments in advanced manufacturing that will transform the nature of manufacturing jobs, they said. Those investments mean more preparation and training for current employees and future hires.

"We are working with our partners to help develop people with the skills needed by aerospace companies," said Michelle Burreson, senior manager of Workforce Development & Integration at Commercial Airplanes. "By sharpening existing academic partnerships and creating new ones, we can make sure that school curriculum matches the skill needs of employers. So far we have partnerships with 29 high schools, skill centers and community and technical colleges in specific skill areas to ensure new hires are career ready."

Once hired, employees participate in a five-day enhanced orientation. The second wave of more than 30 new hires from high schools and skills centers starts the program this month.

"The goal of the Pierce County Skills Center is to prepare students for high-wage, high-demand careers," said Michelle Ledbetter, director of the Pierce County Skills Center in Washington state. "Our aerospace manufacturing students are excited about the opportunity to start their careers in manufacturing at Boeing. These are viable, well-paying jobs, with great opportunities for professional development and advancement."

Shevchuk echoed that sentiment. "I'm looking forward to starting my Boeing career and taking on some new challenges," he said, "and at some point pursue a college degree on the company."

By Peter Pedraza and Jordan Longacre 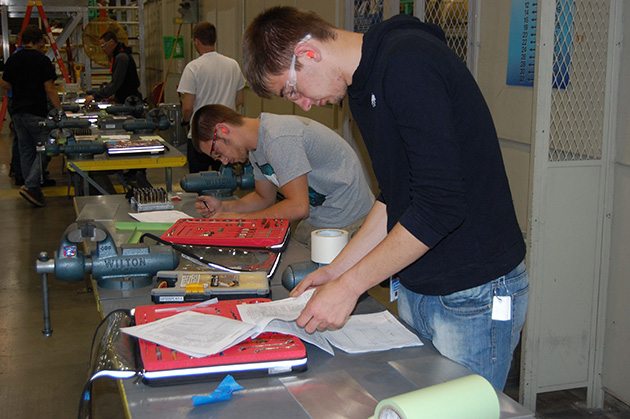 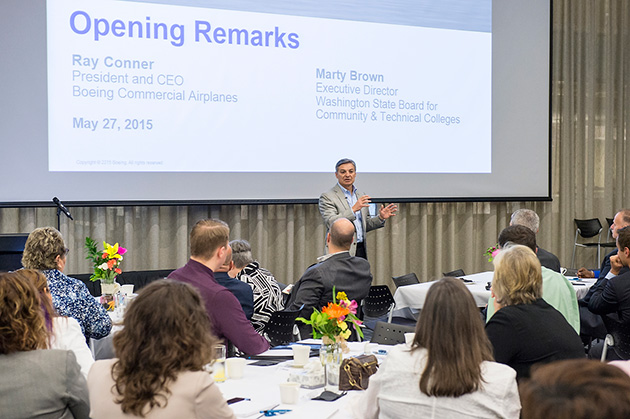 Earlier this year Ray Conner, Commercial Airplanes president and CEO, spoke to more than 50 community college and high school educators about working together to build the future manufacturing workforce in the Puget Sound region.