As Seattle Mariners fans filed into their seats at T-Mobile Park, members of the Puget Sound chapter of the Boeing Veterans Engagement Team (BVET) stood ready inside the right-field tunnel waiting for their cue.

“We had a long waitlist of people who wanted to participate, and I was fortunate enough to get my name in early enough to be able to come out here,” said BVET member, Maj. Stephen Bish, Ret.

Stephen Bish has been with Boeing for 24 years, and he spent 23 years serving in the U.S. Army Reserves. Bish is one of the 44 BVET members who carried a giant American flag onto the field during the national anthem at the Mariners game on Saturday, May 7. 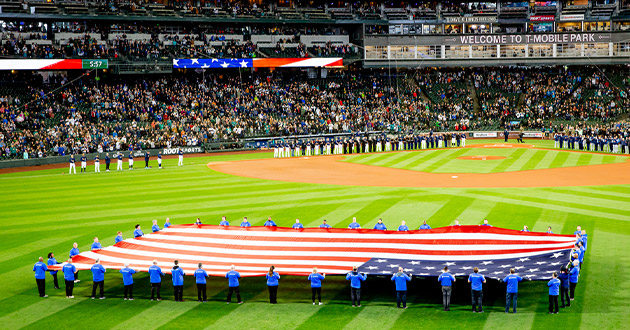 Members of the Boeing Veterans Engagement Team hold the U.S. flag during Salute to Armed Forces Night on May 7, 2022

“It is a great honor to be able to carry out the flag and be here with all the different veterans,” said Bish.

The flag ceremony was part of the Boeing-Sponsored Salute to Armed Forces Night at the Mariners game. Boeing handed out 10,000 Mariners hats to fans, and also extended an invite to one of the company’s valued partners, Nate Boyer of Merging Vets and Players, to throw out the first pitch.

Nate Boyer of Merging Vets and Players throws out the first pitch on behalf of Boeing during the Mariners Game on May 7, 2022

“It was great! I was a little bit nervous, not going to lie,” said Boyer. “Everybody kept saying don’t bounce it, don’t bounce it and I just about did!”

Boyer is a former Seattle Seahawk and Green Beret. Shortly after he retired from pro football, he co-founded an organization called Merging Vets and Players, or MVP, which Boeing supports through grant funding.

“Without Boeing, we wouldn’t have been able to open in Seattle, first of all. Seattle was our 6th chapter and we’ve been wanting to come up here for a long time.”

MVP pairs former pro-athletes with combat veterans who support one another. And while sports and combat are extremely different, Boyer notes there are similarities at their core.

“That identity of who you were in your profession and being part of a team and feeling a deep connection to a mission and very specific structure -- all those things are very similar,” said Boyer. “And then it’s like just gone. And you feel like you’ll never be great again. It’s hard to recover from that and feel like you belong anymore and you almost just want to disconnect and separate yourself.”

Boyer and his MVP team draw those who feel disconnected back into the fold of community and camaraderie – and that’s where he sees the lives of participants improve.

“If you got something you’re dealing with that happened 10 minutes ago or 10 years ago,” said Boyer, “this is the place to kind of lay it out there, and let’s talk through it and figure it out and move forward in a positive direction.”

“Boeing applauds the great work MVP is doing on behalf of veterans,” said Bill McSherry, vice president of Boeing State & Local Government Operations. “And we are proud of our Boeing Veterans Engagement Team for representing Boeing and our American flag in such an outstanding way on Saturday.”