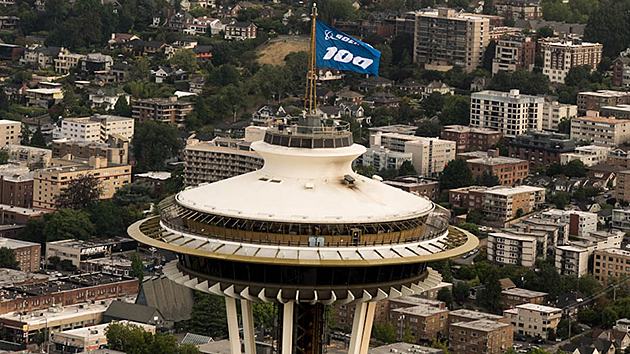 It was a weekend to celebrate as employees gathered to pay tribute to Boeing’s first century, and the message from company leaders was suitably uplifting:

By setting bold and inspiring goals for the future of aerospace innovation, every Boeing employee has the potential to build on the legacy of Boeing’s first century and make a lasting impact on the second,

The weekend-long global celebration was headed up by activities in Seattle, where Bill Boeing founded his airplane company on July 15, 1916. The festivities began with the raising of the Boeing centennial flag atop Seattle’s iconic Space Needle at 7:15 in the morning.

In the shared celebration that followed, employees around the globe came together to view a live webcast that reveled in the company’s many first-century accomplishments while keeping a sharp focus on the challenges and opportunities that the future holds.

Chief Technology Officer John Tracy traced the arc of Boeing’s rise to aerospace leadership while Dennis Muilenburg, chairman, president and CEO of The Boeing Company, set the course for the century to come.

In between, the focus was on the people who make it all possible, with speakers sharing personal stories of their Boeing roots and experiences. Earlier in the day, Boeing employees helped launch Founders Day festivities at the ringing of the opening bell at the New York Stock Exchange.

Muilenburg said the company shares the same passion for the future that defined the company’s founders.

“The innovative spirit of our founder Bill Boeing, who 100 years ago today dedicated this company to building something better, is alive in the generations of our people who continue to deliver products and services that matter and positively change lives around the world,” Muilenburg said.

“As we embark on our second century, our commitment to excellence is stronger than ever, our potential for achievement is as great as it was for our founders, and our goals must be even more bold, visionary and inspiring,” he said.

During the Centennial weekend, the Museum of Flight, located in south Seattle and adjacent to Boeing Field — hosted a lineup of all 7-series commercial airplanes as well as military, space and historical aircraft.

Some of Boeing’s Washington sports partners also jumped in on the celebration action! At the Mariners game on July 15 - the date of Boeing’s actual Centennial – Mariners players including Robinson Cano and Kyle Seager wished Boeing birthday in a game-day video. Also, retired Boeing employee Bill Bruns threw out the ceremonial first pitch at the Boeing centennial-themed Seattle Mariners baseball game. Five generations of the Bruns family have worked at Boeing, including his son, daughter-in-law and grandson, among others, all of whom are all current employees and joined him on the mound.

By Cecelia Goodnow and Dan Ivanis 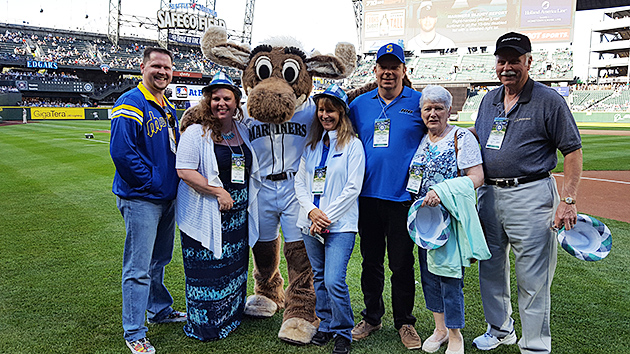 Boeing retiree Bill Bruns (far right) poses with the Mariners Moose and other Bruns family members who are all current or former Boeing employees before throwing out the ceremonial first pitch. 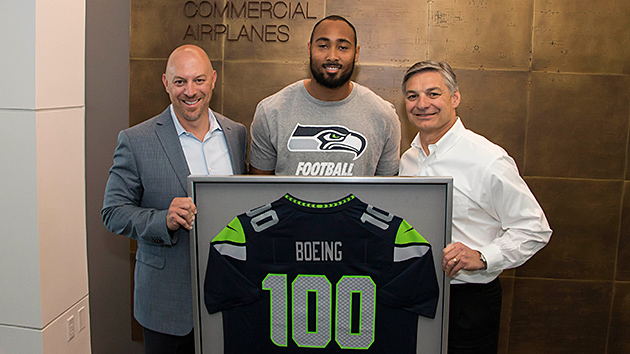