It’s a rare family photo taken high in the sky. New snapshots show the KC-46 Pegasus refueling the P-8 Poseidon over southern California. Both airplanes, which are Boeing-born in the Puget Sound area, met recently for receiver certification testing out of Edwards Air Force base.

“During these challenging times for our company, it’s important to remember our mission,” said Tim Peters, vice president and general manager of Commercial Derivative Aircraft. “This photo highlights the amazing work of our Puget Sound teams and true One Boeing efforts to support our customers.”

“This refueling effort was really exciting for the Puget Sound as we have many team members who support both programs,” said Jamie Burgess, KC-46 tanker vice president and program manager. “Great teamwork all around.”

Stu Voboril, P-8 vice president and program manager echoed Jamie’s comments, “in the spirit of One Boeing – congratulations to the KC-46 team.”

As part of the testing, KC-46 and the P-8 receiver aircraft flew at different airspeeds, altitudes and configurations to ensure compatibility and performance throughout the refueling envelope. 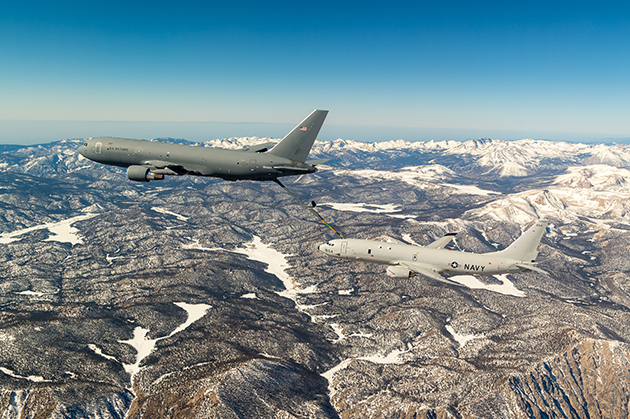 The KC-46 Pegasus and P-8 Poseidon meet for recertification testing over southern California.