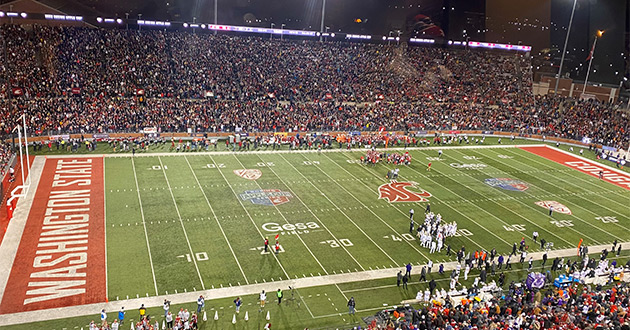 It was a chilly night in Pullman, Washington, Saturday for the kickoff of the Boeing Apple Cup football game between cross-state rivals Washington State University (WSU) and University of Washington (UW). Because of the pandemic  it had been four years since the football rivalry played out at WSU’s Martin Stadium, and the fans were ready.

“It’s great to be back in Pullman this year,” said Andres Jaquez, senior business analyst and WSU grad. “We’ve learned that no matter how the Cougs and Huskies play during the season leading up to the Boeing Apple Cup, anything can happen during this rivalry game.”

Boeing has long been a sponsor of the historic football matchup – along with the expanded Boeing Apple Cup Series — which includes sponsorship of all men’s and women’s sporting matchups between WSU and UW. Boeing employs thousands of graduates from both schools, so the sponsorship is a perfect fit.

Michelle Carey is the 777 chief project engineer deputy leader and a UW alum. “As I walk around Boeing I am always seeing Husky and Cougar lanyards, team wear and more,” she said. “With over 7,000 Boeing employees graduating from UW, I am daily seeing new people I don’t know wearing UW team wear and greeting them with ‘Go Dawgs!’”

Both universities have Boeing employee groups where they show their school spirit.

A few Boeing leaders were also on hand and participated in some major Boeing Apple Cup game moments too.  Executives Steve Chisholm and Craig Bomben, graduates of UW and WSU respectively, supervised the pregame coin toss, gave halftime interviews and assisted in awarding the Apple Cup trophy to UW following a 51-33 victory. 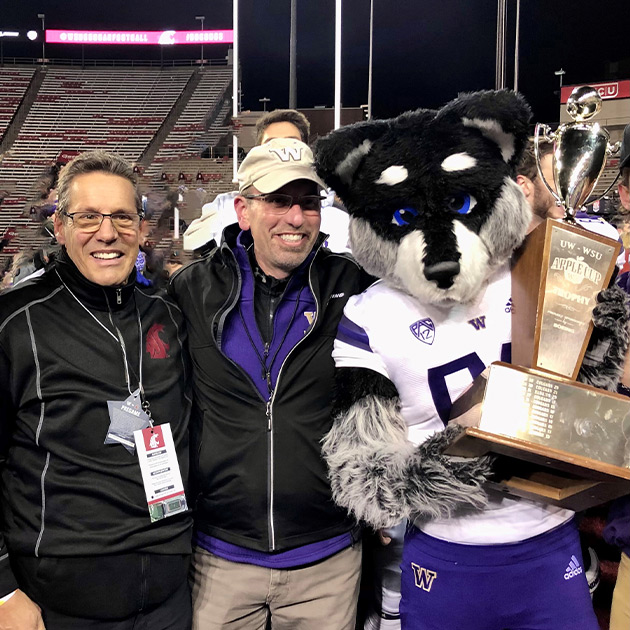 “It’s all about our community,” Carey said. “Boeing, UW and WSU are great partners both on and off the field and the Boeing Apple Cup is where we all come together as a community and cheer/support the students both on the field and academically.”

Jaquez agreed, “Husky and Coug fans have been cheering on their football teams in the Apple Cup for more than 100 years now,” he said. “It’s a time-honored tradition. I’m already looking forward to next year when WSU takes that trophy back!”