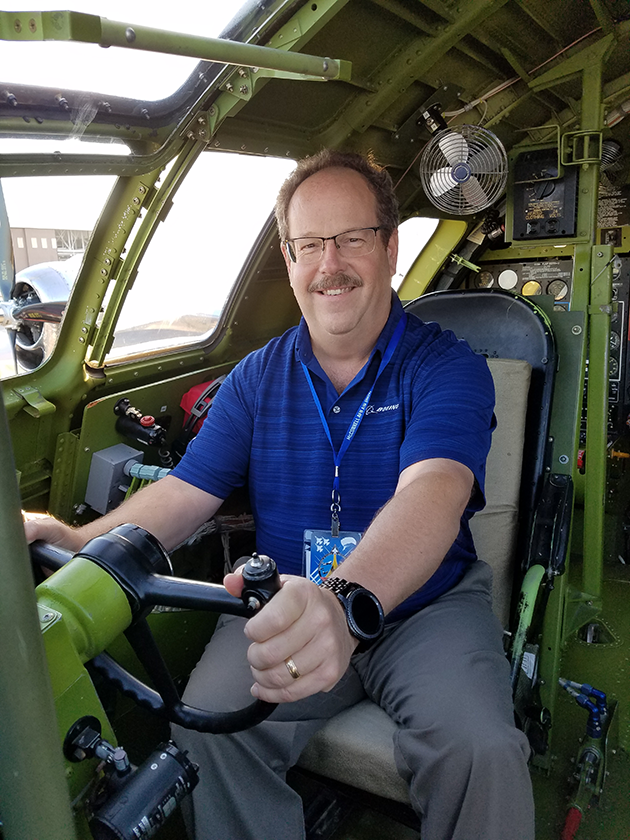 Matt Lobeck, Commercial Derivative Aircraft systems engineer, tours one of the last flying B-29 aircraft, “Doc,” during a 2018 air show at Seymour Johnson Air Force Base in North Carolina.

Matt Lobeck, Commercial Derivative Aircraft engineer, has spent most of his three-decade career in the Integrated Technology Development Laboratories bringing military aircraft to life through simulation technology. Based in Seattle, Washington, his team sets up demonstration trailers that help engage customers, suppliers and employees on business developments — a role he is both proud of and humbled by.

To help understand his work, think of an immersive video game in the back of a 53-foot semitruck trailer. His team creates these experiences for defense customers to visualize the product in a mobile environment. Lobeck knows his job is unique and credits his long-standing career to his teammates and mentorships.

“Every day I get to see firsthand how good my co-workers are at relating to others,” he said. “No matter the customer’s experience level or if it’s a supplier needing to understand how critical they are to our mission, it’s inspiring.”

The Integrated Technology Development Laboratories organization has been around since the early 1960s and stems back to the Gemini and Apollo programs. Trailers contain flight-deck simulators, virtual reality mission systems, and 3D materials for interactive exhibits that are used at trade shows, first deliveries and for supplier engagement. Lobeck joined the team in 1986 and has supported Joint Surveillance and Target Attack Radar System, or JSTARS, and the P-8 and KC-46 programs. He works with partners on the KC-46 Remote Vision System for the Air Refueling Operator station.

“Instead of standing up new groups, staying in one organization has helped us build our wealth of knowledge and ensure things are successful when the programs contact us,” Lobeck said.

His expertise is also highly valued outside of Boeing. Lobeck mentors a FIRST Robotics team at Tahoma High School in Maple Valley, Washington, including his youngest son, Kacey. Through the program, students have a chance to explore technical paths, project management and marketing before entering college.

“I suggested Kacey give the club a shot when he was a sophomore in high school,” he said. “Now he’s an engineering senior at Eastern Washington University.”

Lobeck says his own love for aerospace came from visiting local U.S. Air Force museums in Ohio with his father, and he wanted to create a similar experience for his son. This year, with dad’s encouragement, Kacey took on an ambitious senior project managing the build of a radio-controlled F-22 with the help of a Spokane company, Triumph, and his college teammates.

“His professor disclosed he could’ve probably stopped at building the carbon fiber molds for the aircraft, but he insisted to take it to flight,” he said.

Lobeck’s gift for working with future generations does not go unnoticed by his colleagues. Dan Devries, engineering site leader for Commercial Derivative Aircraft, said, “When I think of the people Matt’s mentored, they are now leaders at the company. It’s exciting to see him, and others, share their success and directly impact our future pipeline of workers.”

Lobeck agrees on the importance of finding the right mentor. His advice to employees is to “Look for someone who will teach you the ropes of how Boeing runs as a business and how to apply your skills,” he said. “Between the people who supported my development and the people I work with today … I’m very grateful.” 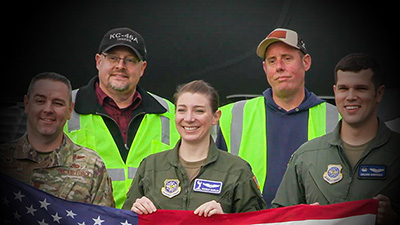