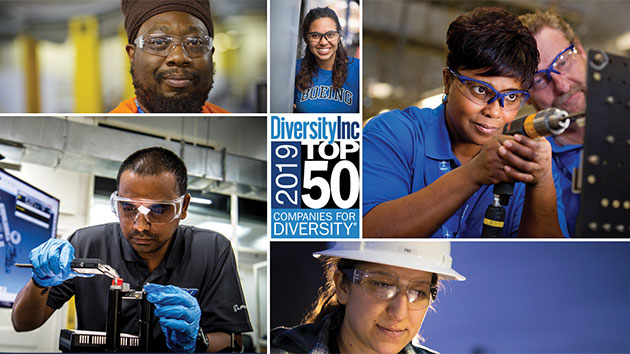 “The most important investment Boeing makes is in our people,” said Dennis Muilenburg, Boeing chairman, president and CEO. “We’re intentionally becoming more diverse and focusing on inclusion because we know it will make us a better company. That’s why we’ve set bold goals in these areas, and they’re making a difference.”

The company’s 2025 diversity goals include reaching full representation of women and minorities at availability for the U.S. workforce; increasing non-U.S. population to 25 percent; increasing employee engagement and inclusion to top quartile; increasing opportunities by 25 percent for small and medium diverse suppliers around the world who perform work for Boeing; and to be recognized as a top company for diversity and inclusion by external validators such as DiversityInc.

“We know our success relies on our ability to honor and celebrate the best in everyone, from every background and country, every race, every gender identity and orientation, disability, and military status,” said Sara Bowen, vice president of Global Diversity & Inclusion. “Diversity and inclusion aren’t nice to have, they’re a business necessity.”

To see the complete Top 50 list and read more about Boeing’s entry, go to the DiversityInc Top 50 Companies for Diversity.

Boeing delivers innovative and agile equipment, capability and services to the nation’s military, but it is equally invested ensuring military forces maintain an advantage after their service is done. Noticed for these commitments, in addition to the DiversityInc ranking, Boeing also earned a spot on Military Times’ Best for Vets list this week — No. 24, up from No. 31 last year.

Boeing also has received various other recent awards and accolades for its commitment to veterans, including:

Boeing and employees have contributed more than $80 million to veterans initiatives in the last five years, in addition to sponsorships, memberships and donations to military and veteran programs and organizations.