A heron perches amid restored wildlife habitat as a Boeing-sponsored sunset boat tour sets sail from Harbor Island on the Lower Duwamish Waterway in Seattle with a capacity crowd of 175 community members, as part of the Duwamish River Festival.

“I learned a great deal that will assist me in decisions I make about run-off and use of chemicals,” said an attendee, who had an “aha moment” about how individuals can reduce stormwater contaminants in the river.

Families, children and friends joined Boeing remediation experts, along with partners King County, the City of Seattle and the Port of Seattle, and others to learn more about the cleanup effort, including a three-year dredging project of 3,000 railcars of contaminated soil replaced with clean materials, restored fish and wildlife habitat, and extensive stormwater treatment on Boeing’s 125-acre site.

As he pointed toward the shoreline near Boeing’s old Plant 2 facility, an early-action site, Boeing environmental remediator Brian Anderson told the crowd about Boeing’s award-winning transformation of nearly one mile of waterway.

“We have turned this piece of an industrial waterway into a wetland habitat to support fish and wildlife,” Anderson said. He pointed out rain gardens and filtration systems that treat stormwater before it returns to the river.

By Holly Braithwaite and Monica Zimmer 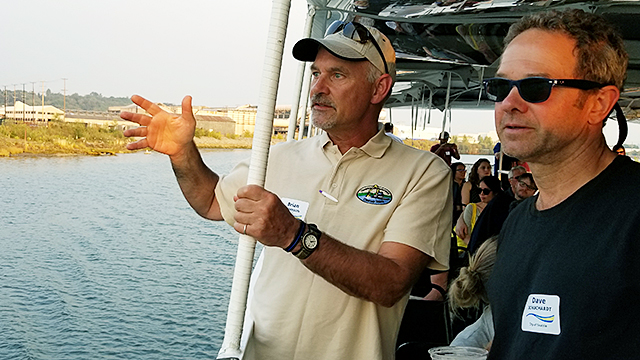 Boeing Environmental Remediator Brian Anderson leads a boat tour of nearly 200 community members along the Lower Duwamish Waterway to showcase Boeing’s progress in cleaning and restoring the shoreline for fish and wildlife.