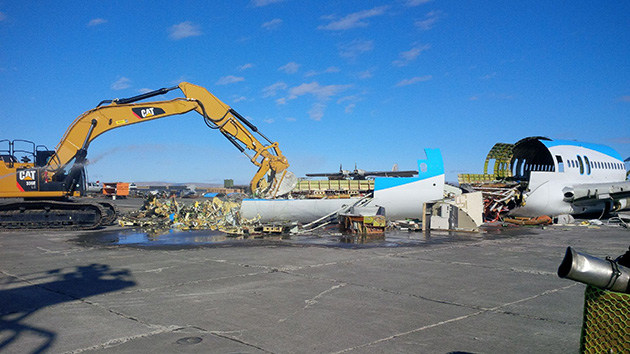 A giant excavator begins the crushing process of the ecoDemonstrator 757 at the disassembly company, Aircraft Demolition, in Moses Lake, Wash. Boeing engineers attended the final disassembly to study how to make airplanes more useful once they're no longer in service.

Boeing participated to better understand what happens at the end of an airplane's service. Engineers also were studying more efficient recycling techniques and determining how to extract the most value from the materials and parts on future airplanes.

The ecoDemonstrator 757 landed in Moses Lake for the last time in July after finishing a four-month flight-test program. Since then, disassembler Aircraft Demolition has been pulling valuable parts off the airplane and selling them for the aircraft owner, Stifel Bank. Valuable components like landing gear, avionics, lavatories and ducts get overhauled, re-certified and returned to service. High-value metals and material parts also are removed.

"We are using this opportunity to look at how we can design our airplanes better in the future for their end-of-service recycling," said Jeanne Yu, Commercial Airplanes' director of Environmental Performance. "Watching the recycling of this airplane over the last two months has given us insight about using better materials to build the airplane, with recycling in mind, or better design that allows the airplane to be disassembled easier."

After two months of extracting parts, all that was left was recyclable aluminum and unusable material. Boeing engineers from Commercial Airplanes Product Development and Environment Strategy have monitored the recycling process and the final crush to figure out better ways to re-use even more of Boeing airplanes in the future.

The aluminum pieces from the final crush at Moses Lake are now headed to a company in Tacoma, Wash., where the aluminum will be sold for re-use in Asia and other regions of the world. Boeing engineers are studying how more of the airplane-grade aluminum can be recycled into future airplane parts. The ecoDemonstrator 757 helped them gather the data for that study.

"Designing for producibility and safety have always been the higher priorities as we draw up our next new airplane," said Mike Sinnett, Commercial Airplanes' vice president for Product Development. "But the ecoDemonstrator program is showing us that looking at the end of service of an airplane should be a consideration also to create higher residual value, economically and environmentally." 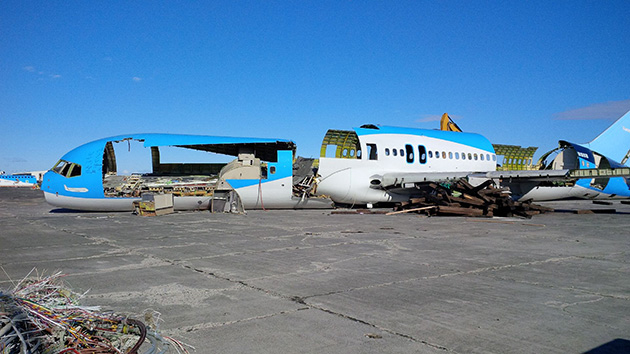 Boeing engineers from Commercial Airplanes Product Development and Environment Strategy have monitored the recycling process and the final crush of the airplane to figure out better ways to re-use even more of Boeing airplanes in the future.