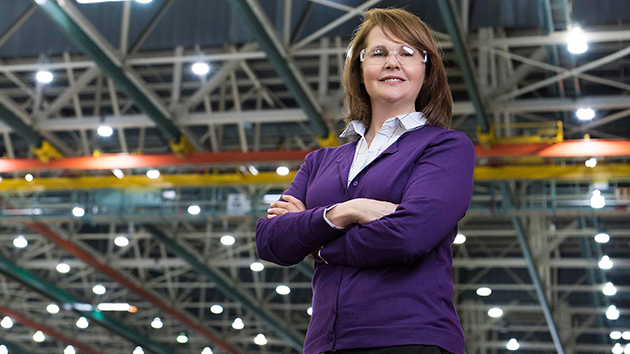 Beth Gilbertson, just named 2018 Boeing Environmental Champion, spearheaded the replacement of all the lights in the Boeing Renton site factory to LED lights which is being replicated in other areas of Boeing.

Nothing like a little friendly competition to show how when Boeing competes, the planet wins with reduced energy use. In Boeing’s inaugural site-wide Battle of the Buildings competition this past April, North Boeing Field in Seattle, Wash. reigned supreme out of 47 sites in six countries. The Everett, Wash. site also emerged as a winner, rounding out the list of energy saving leaders with a bronze award.

North Boeing Field employees adopted a variety of energy-saving actions from turning off lights and equipment when not in use, to projects with bigger impacts like adjusting ventilation system motors and improving processes in their paint hangar. “Adjusting motor speeds is a good way to reduce equipment energy use by up to 50 percent or more; it also reduces wear and tear on ventilation equipment,” said Beth Gilbertson, Boeing Facilities resource and utility conservation specialist.

Paint hangars at North Boeing Field make use of paint that cures at lower temperatures, requiring significantly less energy for the drying process.

The competition also sparked impressive energy reduction at other Washington sites. In Auburn and Frederickson, Washington, employees powered off lights during just one weekend overnight shift in an area where nobody was working. This simple action saved enough energy to power 31 average homes for an entire month.

Twenty-three Boeing sites reduced their energy use with 12 locations saving 10 percent or more throughout the competition. Those savings helped reduce Boeing’s overall energy consumption by 1.6 percent, or enough to power nearly 4,000 average homes for a year.

“Extraordinary employee participation demonstrates Boeing’s commitment to the environment,” said Steve Shestag, Environment Director. “Activities like this reflect our aspirations as the best in aerospace and an enduring global industrial champion.”

Boeing’s new environment strategy, publicly released in June 2018, includes targets to reduce energy use by 10 percent and greenhouse gas emissions by 25 percent by the year 2025.