Fabrication of horizontal stabilizers for 777-300ERs (Extended Range) and 787s had been done the same way for years at the Composite Manufacturing Center (CMC) in Frederickson, Wash.

The process wasn’t perfect, but for Kirby Kilmurray, team lead for composite tape laydown, it was good enough to meet production demands.

Good enough, that is, until Kilmurray was asked to add 777X models into production — and that’s when sleep-disturbed nights began for him. His group didn’t have the capacity to add seven shipsets (two horizontal stabilizers each) per month into its production schedule. The work area also wasn’t big enough to accommodate longer 777X parts. He said he had nightmarish thoughts of increasing overtime and declining quality.

Knowing that other organizations had faced similar challenges — incorporating significant new work statement into existing production — he went looking for successful solutions his team could replicate. He found it in the form of optical laser templates (OLTs), which were in use elsewhere within Boeing.

OLTs provide a stable, overhead guide that displays on the wing like an old-fashioned sewing pattern. They would replace a cumbersome, unreliable process that relied on ink-jet printers.

He said he started to sleep through the night again.

Daagon Mosley has been at CMC for eight years, most of that time operating a tape laydown machine (CMC is now part of Fabrication’s Advanced Developmental Composites-Composite Manufacturing Center business unit). The machines are like washing machine-sized scotch-tape dispensers working in reverse, spitting out ribbons of black composite material of different widths (the CMC machines lay down either 6-inch or 12-inch-wide ribbons of tape with each pass).

Mosley could see almost immediately the benefit of the OLTs. Under the time-consuming old system, the tape laydown machine would move around the composite wing, laying tape where the software told it to. Then a second machine, an ink-jet printer, would automatically glide over and help the laydown operator (and, later in the process, quality inspectors) evaluate the accuracy of the tape laydown.

In contrast, the continuous OLT display of where tape should properly be laid eliminates excess machine movement, saving time and making it easier for operators and quality inspectors to spot errors.

“In the past, it would take us six shifts to lay down a single wing,” Mosley said. “With the OLT, I can now do 40 percent of a wing on a single shift, and quality has skyrocketed.”

Looking back at his team’s success, Kilmurray ticked off the advantages by memory:

Most importantly, the change allowed introduction of the 777X stabilizers with room to spare — both in the production schedule and physical space.

“This was a case where we used a process because it was what we’d done for years,” Kilmurray said. “It didn’t change until we were forced to make room for the 777X parts. The new reality forced us to change.” 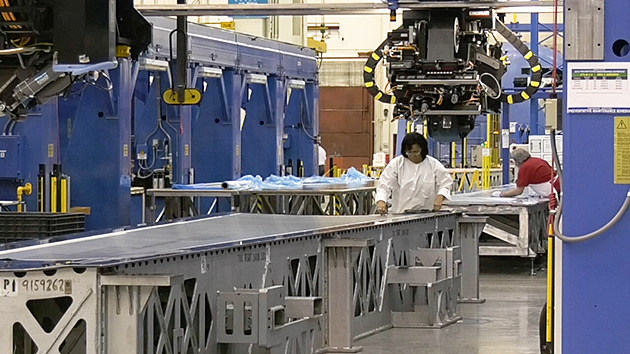