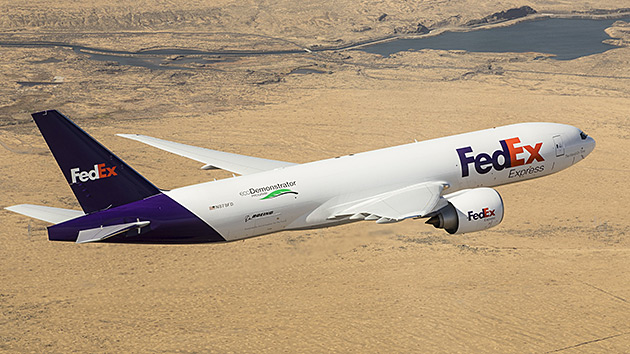 The 2018 ecoDemonstrator flies over eastern Washington on its first Boeing check flight.

To most, it looked like a normal delivery to FedEx Express recently when Boeing Commercial Airplanes handed over the keys to a 777 Freighter. Yet, the special decals attached to the fuselage indicated it will be the next ecoDemonstrator, the fifth iteration of the flight test program.

In 2018, Boeing and FedEx plan to work together to test more than 35 technologies aboard the FedEx-owned 777 Freighter, including flight deck enhancements, compact thrust reverser and advanced materials.

Before testing innovations that could enhance flight safety and efficiency, the airplane will first go into revenue service in the FedEx fleet through the end of the year, flying international routes. The freighter will be returned to Boeing in January, when it will serve as the ecoDemonstrator testbed through May.

Some of the technology, with the goal of reducing emissions and noise, also can improve airlines’ gate-to-gate efficiency and other operational goals. Proven ecoDemonstrator technologies and processes might be incorporated into existing production models, made available for in-service fleets or applied to new airplane development programs.

After testing is completed, the airplane will be returned to FedEx in original condition so the carrier can return the airplane to service in its fleet.