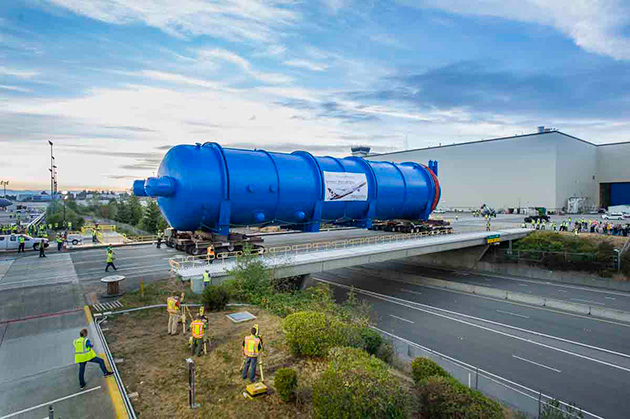 Big, blue and on the move!

Looking like an oversized prop for the famous Blue Man Group theatrical company, the first autoclave that will be used to fabricate wings for the 777X completed a highly anticipated – and choreographed – road trip last week.

At 1.1 million pounds (500,000 kilograms) and traveling two miles (3.2 kilometers) per hour, the big blue vessel took five days to travel from Paine Field in Everett, Wash., to the new Composite Wing Center on the main Everett campus. It attracted curious onlookers who gathered to catch a glimpse of one of the world's largest autoclaves by volume.

The autoclave will provide the super-heated pressure required to build the 777X's composite wings. Perry Moore, 777X Wing director of Operations, said the entire 777X team is "jazzed" because of what it means for Boeing's future.

“The team is really excited," Moore said. "A few times in your career you get an opportunity to do something that really leaves a legacy, and for all the people that have worked on this, this is their legacy.

"The whole production system that we're building, we're doing something new for the company and new for the industry, and it's really exciting.”

The three-mile (4.8-kilometer) journey to the 1.2 million-square-foot (111,500-square-meter) Composite Wing Center on the main Everett campus began when the 120-foot-long (37-meter) autoclave was secured to a 128-wheel dolly. "Mighty Matt," that pulled the trailer, tooted its horn to signal that the move was on.

The route crossed a major freeway overpass, where the team requested the highway be closed to ensure worker and driver safety. For the bridge crossing, the dolly's wheel base was modified to 42 feet (13 meters) wide to better spread the load, resulting in a dispersed weight lower than that of a 767 airplane.

Once the load crossed the bridge, the wheel base was narrowed to 18 feet (5.5 meters) wide to navigate through parking lots and around buildings. Upon arriving at the Composite Wing Center, the autoclave was transferred onto a concrete foundation for installation, technical adjustments and testing.

Jonny Edwards, Everett Site Services project manager, reflected on the teamwork and minor trepidations it took to complete the move.

“A major success was getting over the bridge," Edwards said. "There was some concern, but we did it right and got over safely. This is a team accomplishment and something that's bigger than me.

“I love the challenge of something new every day, and it's great seeing it all come together and to ultimately be a part of it."

Suppliers also played key roles in the move, including ASC Process Systems. The company built the autoclave by assembling the barrel sections vertically and welding them together before the completed autoclave was laid on its side and hoisted onto the dolly for transport. Omega Morgan also coordinated the move transportation

By Terrance Scott and Jordan Longacre 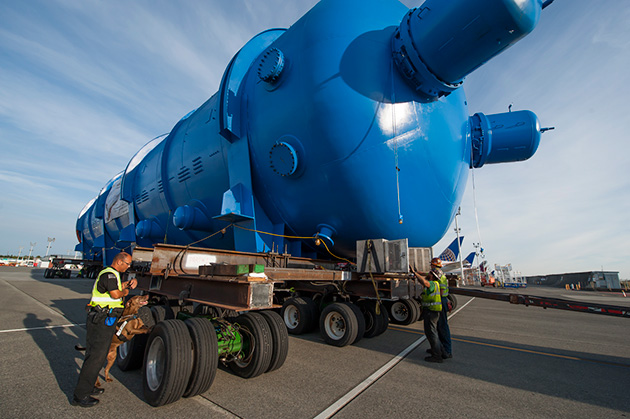 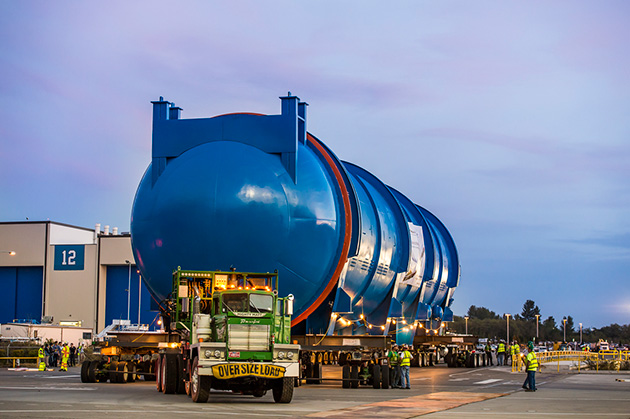 Final preparations are made for transporting the first 777X autoclave from Paine Field in Everett, Wash., to the main campus at Boeing's Everett site. In front is “Mighty Matt,” the hawser that pulled the 1.2 million-pound (544,310 kilogram) load to the new Composite Wing Center.