Boeing leaders announced a $1.5 million grant to For Inspiration and Recognition of Science and Technology (FIRST), an international K-12 not-for-profit organization, to fund support for young innovators through science, technology, engineering and math (STEM) programming.

Part of a three-year, $3.5 million grant package, the company’s investment will assist in the development of targeted mentorship programs that increase STEM diversity, proficiency and interest among K-12 students, specifically among underserved and geographically diverse populations.

“This generous grant from Boeing is helping us move closer to our goal of reaching all kids with equitable access to opportunity, mentorship and engagement to build a foundation for a bright future,” said Donald Bossi, president of FIRST. “We’re incredibly grateful for Boeing’s ongoing commitment to FIRST, especially through the powerful mentorships so many of its employees provide FIRST participants.”

This year, more than 550 Boeing employees have been mentoring more than 10,000 FIRST students across 22 states and in several countries around the globe, according to Boeing Global Engagement. Of those, more than 150 teams and nearly 200 mentors are in Washington state.

Every year, FIRST teams are presented with a new game challenge. Under strict rules, limited resources and an intense six-week time limit, teams of 20 or more students are required to raise funds, design a team “brand,” and build and program industrial-size robots to play a difficult field game against other teams. It’s as close to real-world engineering as a student can get.

Each robotics team is supported by a group of volunteer mentors like Boeing software engineer Jonathan Muckey, who help guide the students and bring engineering concepts to life.

“When I look back on the FIRST [mentorship] experience, the real win in all of this were the many lessons learned — not only for the kids but for me as well,” Muckey said. “Mentoring for this program is such a great opportunity to make a difference in the lives of the future generations of scientists and engineers. It is great to see where they start and where they eventually go.”

For more than 25 years, FIRST has used building robots to introduce young people to the many career options in the fields of science, technology, engineering and math. However, FIRST isn’t just about robotics. It’s about developing future generations of innovators, doers and thinkers.

“Through charitable grants that help fund STEM programs like FIRST, Boeing is working to ensure that students have access to the tools necessary to succeed in the future,” said John Blazey, vice president of Boeing Global Engagement. “This includes increased exposure to STEM subjects and experiences as well as opportunities to apply this knowledge in real and relevant ways.” 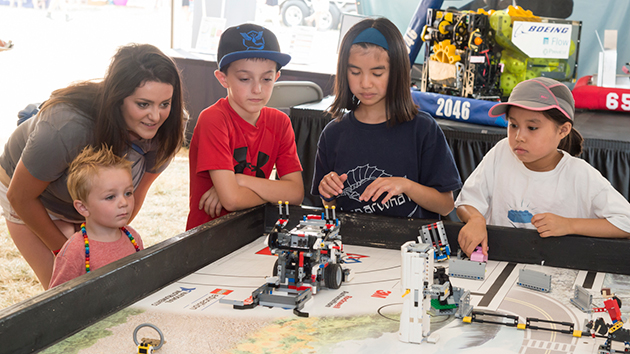