The ecoDemonstrator 757 is the kind of airplane that gets Kirk Vining excited.

The 757 is part of a series of flight tests that support the ecoDemonstrator program’s multi-year effort to accelerate testing, refinement and new technologies and methods that can improve aviation’s environmental performance. Flight tests using the airplane will continue through July.

For Vining, a Boeing Test & Evaluation test pilot with 22 years of experience, the airplane also brings unique challenges and opportunities.

“This ecoDemonstrator is not a digital airplane,” Vining said.

The airplane has older-style instruments and is testing technologies that affect the flying qualities of the airplane, a modification to one wing, a rudder with boosted authority in one direction and two differently sized engines, he explained. “This airplane requires more pilot involvement in hand-flying it, and I enjoy that," said Vining.

During testing, Vining and a team of engineers will closely monitor how the left wing performs. It will evaluate a Krueger shield that protects the leading edge from insect strikes and residue--a way to improve aerodynamic efficiency. 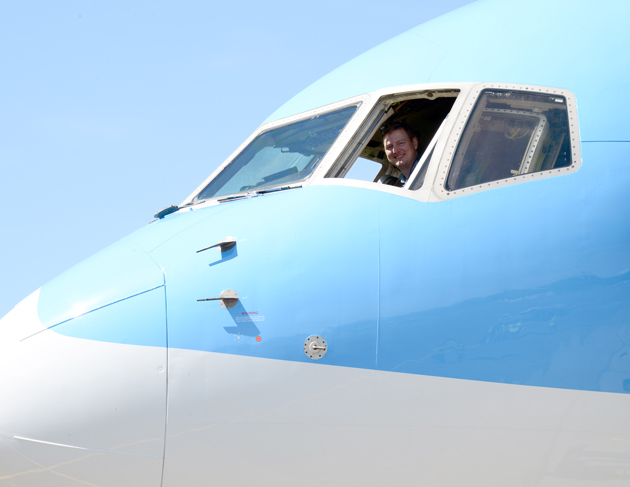 Kirk Vining, a Boeing Test & Evaluation test pilot, looks out from the flight deck of the ecoDemonstrator 757.

Also in their sights is the rudder. The vertical tail and rudder on an airplane are designed to help stabilize the aircraft in the unlikely event of engine failure. But the rudder on the ecoDemonstrator is more powerful than on a typical 757. That’s because Boeing and NASA are collaborating to test active flow control as a way to improve airflow over the rudder and maximize its aerodynamic efficiency.

Based on wind-tunnel testing, active flow control could improve the rudder’s efficiency by up to 20 percent. It’s through this testing that NASA and Boeing may learn if airplane designers can one day pack more punch into a smaller tail and rudder package. With the exception of Boeing proprietary technology, NASA knowledge gained in collaboration with Boeing from ecoDemonstrator research will be publicly available to benefit the industry.

“The vertical fin adds weight and drag to the airplane for the life of the airplane, for the unlikely event you might lose an engine,” Vining said. “We can’t get rid of it, but we are exploring ways to reduce its size and make it more powerful.”

The 757 is Vining’s third ecoDemonstrator test airplane. He flew its 737 and 787 predecessors in 2012 and 2014, respectively. It continues to be a fascinating journey for him, he said.

“Watching the ecoDemonstrator culture grow, as a culture of innovation, finding ways to do things outside the box, with safety and value always in view — it has all been very rewarding,” he said.