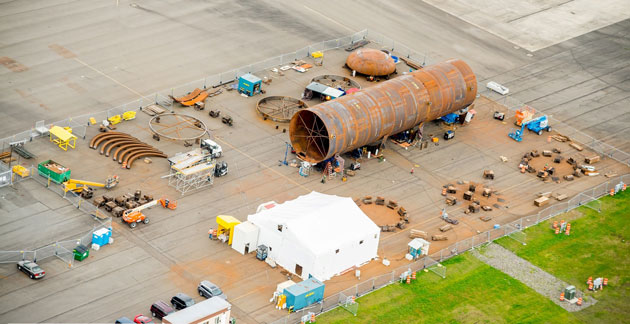 Construction in Everett, Wash. is wrapping up on the first of three giant autoclaves that will use super-heated pressure to build the immense composite wings of the 777X.

The 777X wingspan, stretching 235 feet, or 71.6 meters, will be the largest on any Boeing commercial or military airplane — and the autoclaves that build their composite structures will be Boeing’s largest by working volume. The project is progressing right on schedule.

“After two years of planning and construction, we’re excited to witness our first autoclave start to take shape,” said Jason Clark, vice president, 777 and 777X Operations. “This autoclave is a key component to the 777X production system — a grand-scale construction to usher in a grand new airplane.”

The first of three autoclaves, each measuring 28 feet wide by 120 feet long (8.5 meters by 37 meters), has been under construction since July 2014 at a site adjacent to Paine Field near the Everett factory. The autoclave was built in 13 vertical sections, called cans. The cans were then assembled into three towers, each measuring 40 feet (12 meters) tall.

Recently, the towers were turned on their sides and welded together to create the autoclave vessel. Welding is nearly finished, with testing to follow, according to program officials.

The autoclave vessel is the star of the process, but it can function only with an equally large and impressive support system of electrical, air, vacuum and pressure lines, equipment and tooling.

“One of the biggest challenges is the design and construction of all support systems so they integrate properly with the total autoclave system,” Englund said. “Every piece of equipment that is a part of the autoclave has to match with requirements throughout the autoclave cure process.”

Later this year, the autoclave will be transported to the Composite Wing Center, now under construction at the Everett site, for installation and final testing. The autoclave is expected to be fully commissioned in mid-2016. The second and third autoclaves will follow in sequential order.

“Construction of the first autoclave is a significant step toward building our future at the Everett site,” said Ric Solis, Site Services manager. “There have been many intricate integration points we have taken into account, worked through and resolved as a team. This would not be possible without a partnership between all involved from Commercial Airplanes, Site Services and outside suppliers to make us all successful.” 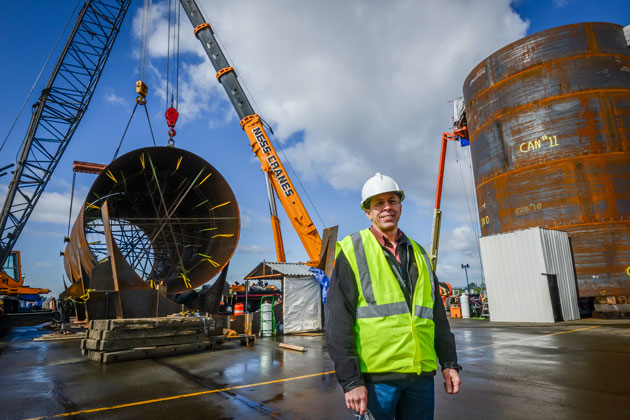 Project manager Larry Englund, at the autoclave construction site in Everett, Wash., says design and construction of support systems is one of the challenges of the new autoclave system.