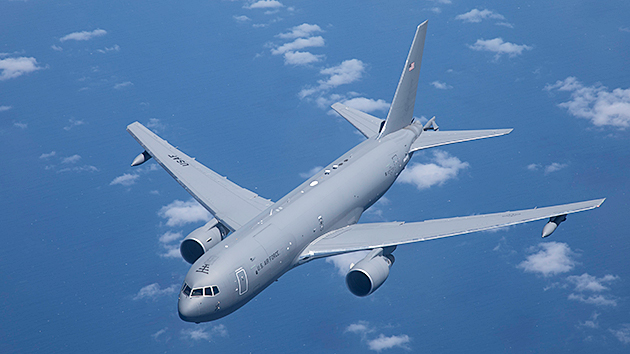 A Boeing KC-46A tanker prepares for receiver certification testing, conducted out of Boeing Field in Seattle.

Another milestone is in the books for Boeing and U.S Air Force teams recently achieved the KC-46 tanker program, completing all flight testing required for first delivery. The KC-46 team concluded both its Military Type Certification testing and receiver certification testing with KC-135, F-16 and C-17 aircraft.

“This is a significant achievement for the Boeing-Air Force team and continues us on our path to first delivery in October,” said Mike Gibbons, Boeing KC-46A tanker vice president and program manager. “Great teamwork all around!”

Receiver certification, which began in April, was conducted from Boeing Field in Seattle, Wash. and Edwards Air Force Base, Calif. As part of the testing, KC-46 and receiver aircraft flew at different airspeeds, altitudes and configurations to ensure compatibility and performance throughout the refueling envelope of each receiver.

Receiver certification testing of A-10 and KC-46 has also begun, with final certification of A-10, F/A-18, KC-46, F-15 and B-52 to be completed prior to the start of Initial Operational Test & Evaluation testing.

The KC-46 test team completed STC flight testing in April and is now working through associated paperwork prior to STC award.

The program has six aircraft that have supported various segments of STC and MTC testing. Overall they have completed 3,300 flight hours and offloaded two million pounds of fuel during refueling flights with F-16, F/A-18, AV-8B, C-17, A-10, KC-10 and KC-46 aircraft.

When in service, the KC-46 will refuel U.S., allied and coalition military aircraft using its boom and hose and drogue systems, but also must be able to take on fuel to extend its operational range. The boom allows the tanker to transfer up to 1,200 gallons of fuel per minute, while the hose and drogue systems, located on both the plane’s wing and centerline, enables the KC-46 to refuel smaller aircraft with up to 400 gallons of fuel per minute.

The KC-46A is a multirole tanker that is designed to refuel all allied and coalition military aircraft compatible with international aerial refueling procedures and can carry passengers, cargo and patients.