Boeing’s KC-46A Pegasus tanker completed its first in-flight refueling on January 24, when it transferred fuel to an F-16 aircraft, marking a key program milestone and paving the way for a U.S. Air Force production decision in the coming months. “Today’s flight is an important milestone for the Air Force/Boeing team because it kicks off the Milestone C aerial refueling demonstration, which is the prerequisite for the low-rate initial production decision,” said Col. Christopher Coombs, the U.S. Air Force's KC-46 system program manager. “We have a lot of work yet to do, but this is an exciting time for the airmen who are preparing to fly, maintain and support the KC-46 Pegasus for decades to come.”

After takeoff from Boeing Field in Seattle, the tanker aircrew — made up of both Boeing and Air Force personnel — conducted a series of pre-refueling checkpoints working with an F-16 fighter flying out of Joint Base Lewis-McChord, Wash.

During the five-hour, 43-minute flight, Boeing and Air Force air refueling operators aboard the KC-46 accomplished multiple contacts with the F-16 aircraft before smoothly offloading 1,600 pounds (725 kilograms, or about 240 gallons) of fuel.

“The refueling boom’s handling qualities were exceptional,” Kahler said. “The boom was extremely stable — it handled like it was an extension of my arm.”

U.S. Air Force pilot Lt. Col Daniel Alix, who flew the receiver F-16, echoed Kahler’s comments and said the first contact went smoother than expected. “The fuel transfer was rock solid; it was very easy to connect and stay connected to the boom."

“Today’s flight is an essential step forward and begins our Milestone C testing that will lead to a low rate initial production decision this spring,” said Tim Peters, Boeing KC-46 program manager. “The ability of BDS Development to execute on key programs enables us to continue to leverage and learn from the One Boeing teams.”

The KC-46A that accomplished Sunday’s refueling milestone soon will begin refueling a number of other military aircraft as well, including a C-17, F/A-18, A-10 and AV-8B. Also known as EMD-2, the tanker made its first flight Sept. 25, 2015, and has completed 32 flights. 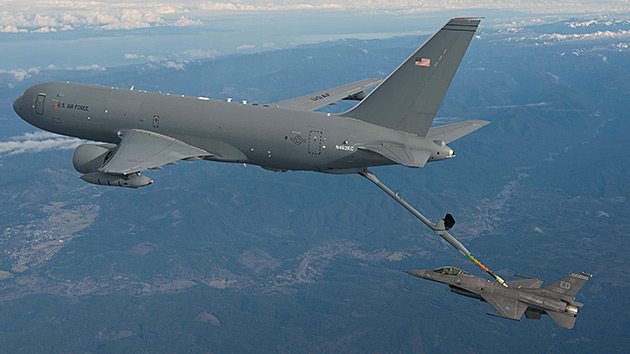 The KC-46A Pegasus refuels a U.S. Air Force F-16 fighter at 20,000-feet for the first time ever. The Boeing multi-purpose tanker transferred 1,600 pounds of fuel to the receiver aircraft, January 24th.