A National Football League (NFL) game lasts just a few hours. But attending a nationally-televised game in person with family and friends, receiving cool team gifts and hobnobbing with famous NFL alumni creates a special memory that can last a lifetime for any young fan.

That is the idea behind a new partnership created this year between Boeing Commercial Airplanes and the Seattle Seahawks. For each home game this season, the Legion of Youth Powered by Boeing (LOY) provides tickets and many other special perks to community organizations that serve youth throughout the Northwest.

Each home game this season, selected organizations are given 100 game tickets that are distributed to 25 youths engaged in their services. Each of those 25 kids receive four games tickets -- one for themselves, plus three more to share with family and friends. It’s a unique experience designed to give a positive boost to local kids who may be facing difficult challenges, or to reward those who are in programs that help nurture their commitment to school work and leadership. 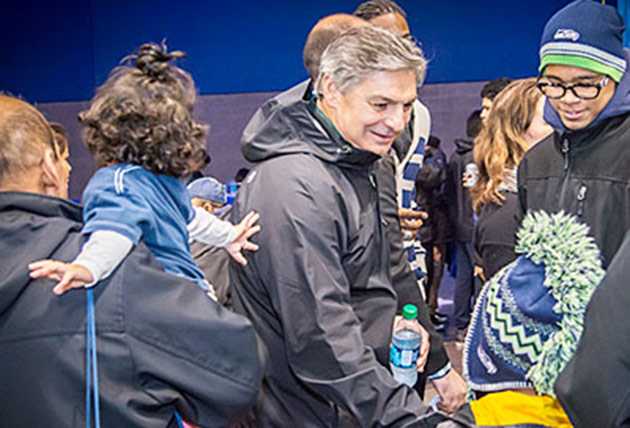 Boeing Commercial Airplanes President and CEO Ray Conner (left) greets Rainier Scholars and their guests as they arrive for the Seahawks game.

The group receiving LOY tickets at the most recent home game between the Seattle Seahawks and Arizona Cardinals was the Rainier Scholars, a group serving low income students of color who are working hard to become the first in their families to attend college. Generally selected as sixth graders, Rainier Scholars must complete 1000 extra hours of academic training beyond their normal schoolwork during their first 14 months in the program. As they grow older, Rainier Scholars works with those students to prepare for, apply to and eventually graduate from college.

Sixth grader Ana Sanchez Medina is one of the young scholars invited to be a Legion of Youth guest along with three other members of her family. “I’m really proud of myself that I persevered throughout the summer, even though it was really hard,” she said with a smile. “The ultimate goal is that it’s really going to help me get to college.” It’s that dedication that made Medina and her Rainier Scholar peers ideal candidates for the Legion of Youth Powered by Boeing.

As they gathered at CenturyLink Field for the game, the students were treated to snacks, Legion of Youth sweatshirts, concession vouchers and visits from a few admirers that included retired Seahawks wide receiver Sidney Rice, Seahawks President Peter McLoughlin and Commercial Airplanes President and CEO Ray Conner.

“They’re the future leaders of this country,” Conner said as he chatted with the kids and their families. “This particular program touches these kids in such a unique way because it involves seeing the Seahawks in person. It’s something they might never have gotten the opportunity to do, and now they’re experiencing it because of what they’ve accomplished.”

For young Ana Sanchez Medina, having her hunger to learn and lead rewarded in such a spectacular way is something she’ll never forget. “I’ve never been to a Seahawks game before,” she says as she pulled on her new sweatshirt. “This is amazing!”

Youth recipients of the LOY experience are profiled on the Legion of Youth website that is created and maintained by the Seahawks.