To many people, Gary Sinise is an award-winning actor best known for the role of disabled veteran Lt. Dan Taylor in the 1994 movie “Forrest Gump.”

Yet when he recently toured the 737 factory in Renton, Wash., the crowd of Boeing employees who met him were most excited about his real-life role as an advocate for veterans. Many of those employees are themselves veterans.

“I think he’s the real deal when it comes to helping veterans,” said Patricia Pyles, a 737 Quality Assurance manager and former Air Force mechanic. “You don’t see a whole lot of celebrities who sign up for veterans like this.”

Sinise visited Renton through a coalition called “Get Skills to Work,” which helps train military veterans for jobs in advanced manufacturing. Boeing worked with GE and other businesses, as well as academic and nonprofit partners, to help launch the program. 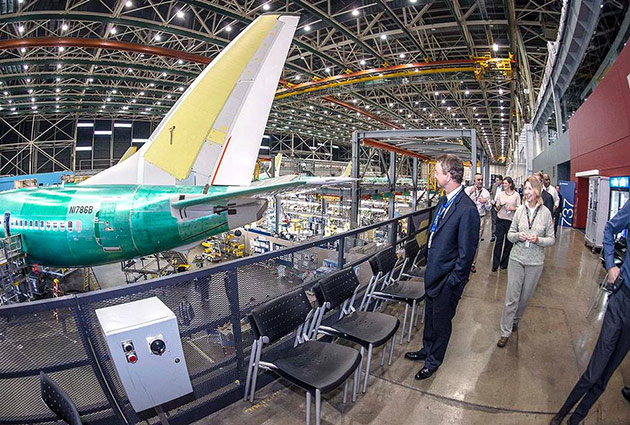 Gary Sinise (center), actor and advocate for veterans, views the 737 production line in Renton, Wash., from the factory’s mezzanine balcony during a tour with Renton employees who also are veterans.

Get Skills to Work is one of many partnerships Boeing is engaged in to help veterans translate the skills they gained in the military and understand the value their military experience can bring to civilian jobs and communities. Additionally, Boeing has hired and trained more than 4,000 military veterans since 2011.

As he toured the Renton site, Sinise admired the airplanes in production. However, he said he draws even more inspiration from the veterans among the employees who build them.

“Veterans know a lot of things,” he said. “They learn organizational skills, teamwork, discipline, leadership — all of these great things. So it’s a benefit to any company.”

Sinise said he “signed up” to support veterans because three generations of his family served with the U.S. armed forces. He said his celebrity status is best used to “shine a light” on veteran’s causes.

“I always believed that we should take care of the people serving our country before, during and after battle,” Sinise explained. “And after the battle is when they transition to a new challenge.”

Boeing veterans who met with Sinise shared tips about what they feel leads to a successful transition to a civilian career.

Jeffrey Thompson, a 737 manager, said when he first came to Boeing, he was fortunate to have a senior manager who also was a veteran. The manager helped him navigate the less-regimented, civilian system.

“His leadership and mentorship over the years was critical for me, especially my first several months on the floor,” Thompson said. “You want to get veterans in, but you also want them to be successful and staying there.” 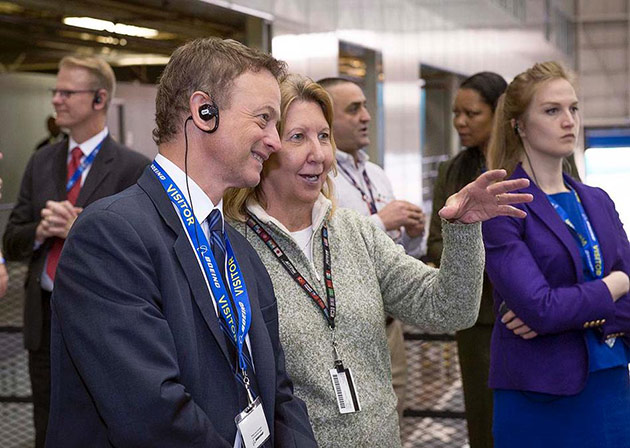 Tom Ritzert, director of Quality and Environment, Health and Safety for Commercial Aviation Services, is the executive sponsor of the Boeing Employees Veterans Association (BEVA). He urges veterans who now work at Boeing to check out the information and services offered by BEVA. He said Boeing wants to do more than just hire veterans; the company wants to help them thrive.

He underscored the connection between Boeing and the military. “We build products that serve the warfighter, not just in BDS (Boeing Defense, Space & Security), but also here in Commercial Airplanes,” he said.