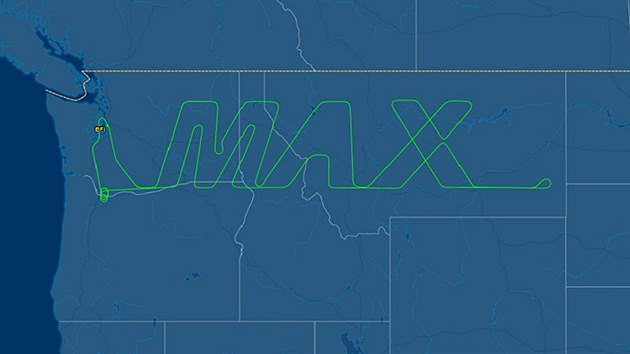 Boeing Test & Evaluation teams got a little creative during a 737 MAX flight test over the weekend, taking a route that drew "MAX" in the skies over Washington, Idaho and Montana. The letters are viewable using a flight-tracking website such as FlightAware.

But it wasn’t a typical flight plan. The airplane, known as 1A004, left its mark in the sky, spelling out the word "MAX" along its path.

The effort was part of a flight test to check the range and efficiency of the 737 MAX, and the letters are viewable using a flight-tracking website. Flight Test engineer Andreas Weisweaver said it took coordination among the test team, flight dispatch, test pilots and air traffic control to plot the 37 waypoints — longitudinal and latitudinal coordinates — that would allow the team to spell "MAX" in the sky.

With Keith Otsuka, BT&E's chief pilot for Commercial Airplanes, at the controls, the team followed the word "MAX" to the letter, while accomplishing its test mission on the maximum duration flight.

“The airplane performed beautifully from takeoff to landing,” Otsuka said. “We’re excited about delivering the 737 MAX to our customers.”