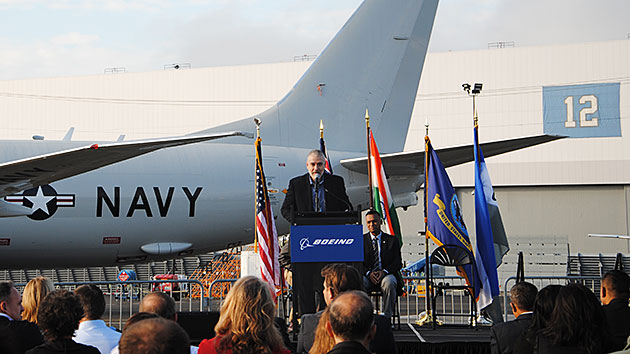 P-8 team members gathered at Boeing Field in Seattle to celebrate the completion of the 100th P-8 aircraft, joined by customers from the U.S. Navy, the Indian Navy and the Royal Australian Air Force as well as representatives from the industry team and the supplier base. The P-8 is a derivative of the Renton-built 737, and is made primarily in Washington.

“The 100th P-8 is a testament to the skills, collaboration and dedication of our entire team”, said Jay Sutorius, P-8 program manager. “P-8 has been called a model commercial development program. That’s because of the people from all across the enterprise and our partners who make it happen. I could not be more proud of our team.”

”We meet the customer almost every day,” said Roger Johnson, Boeing Test & Evaluation. “It’s an honor to give this [aircraft] over to them and to watch them fly it, take it out on deployment and be successful with it.”

The P-8, Boeing’s anti-submarine and anti-surface warfare; intelligence, surveillance and reconnaissance aircraft, is based on the 737-800 Next Generation airplane. It is produced along the same commercial assembly line as the 737 and then delivered to Boeing Defense for the installation of military sensors and equipment before delivery to the customer. It is the first commercial derivative product to use this in-line production approach.