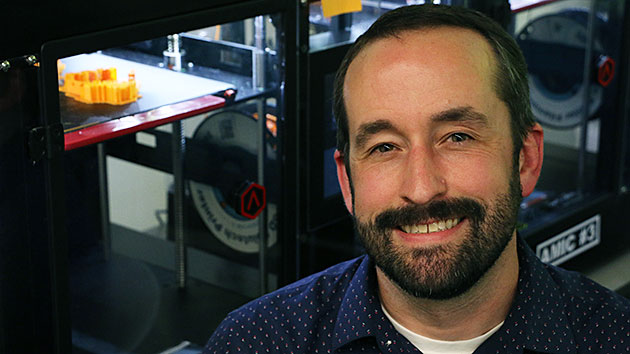 Todd Harless, with a 3D printer in the background, says digital modeling provides "a whole new puzzle that shows how the product, the business and enterprise all work together. It's fascinating."

Todd Harless knows an innovation when he sees it.

He started his Boeing career designing electrical power system architecture for the 787 Dreamliner in 2006 and for the next 11 years worked across that pioneering product’s entire life cycle.

Armed with that perspective, he believes the tools now available through Boeing’s digital transformation — both in engineering and in learning and development — represent the next big leap forward for Boeing’s employees and businesses.

“I’ve been living in the product world for almost 14 years, and that was the center of the universe,” he said. “Now, though, I can see the whole landscape of how everything comes together across the enterprise.”

As part of Harless’ new role as a model-based systems engineer with the 2nd Century Enterprise Systems effort in Everett, Wash., he administers five engineering groups within Degreed@Boeing, which is available through the Boeing Digital Campus.

“Degreed has a really rich digital library of everything out there in the world,” he said. “You can find videos or classes. You can use it as a hang-out and if you find a great article, you can push it back to the community with notes.”

Having a common source of learning, available anytime and to anyone at Boeing, removes silos and taps into the deep well of expertise that’s in place across the enterprise.

“It’s a community-powered system,” Harless said. “If you understand a topic really well, you can set up a course or a pathway for other users to elevate to a higher level understanding.”

He recently completed a complex architectures certificate from the Massachusetts Institute of Technology.

Harless says it may be tough to recognize the huge leaps that are occurring from digital transformation “because we’re right in the middle of it.”

“It’s like when we were using punch cards to create software, and then somebody came up with a modeling language that completely replaced it,” he said. “Digital modeling is starting to revolutionize how we do everything and it’s going to cause everything to accelerate.

“There’s just a ton of opportunity around here.”