Floor-to-ceiling windows and views of the Boeing flight line and the Seattle skyline evoked "oohs and ahs" from many at Boeing Field on Monday as the Seattle Delivery Center opened its recent expansion.

"Take a look out that window — airlines from around the world come here to take their 737s,” said King County executive Dow Constantine.

The new building provides an environment for educating visitors on Boeing's history and future. Its environmental-minded features — including an established range of performance measures for energy and water use and efficiency through all phases of construction through Site Services, maintenance and operations — earned it a LEED silver level certification from the U.S. Green Building Council.

“We have the best aviation workers in the world, and this center will help the region thrive even more,” said Murray.

That growth mindset is what led to the expansion in the first place. The delivery center’s newest addition is partially due to the increasing volume of 737s being build, delivered and yet to be delivered.

"Over the next decade we will be delivering an average of two airplanes every weekday, month-after-month, for the foreseeable future," said Erik Nelson, vice president of 737 Field Operations and Delivery.

Nelson and Pat Shanahan, senior vice president of Airplane Programs, said the center reflects how much the 737 program owes to the work of Boeing employees — present and future.

"It's due to the skill and dedication of the 10,000 men and women of the 737 program that this airplane has become the most popular commercial airplane in service,” Shanahan said. “This facility is a sign of our continued commitment to the community and the Puget Sound region.”

Included in that area is nearby Raisbeck Aviation High School, an aviation- and aerospace-themed school that emphasizes science, technology, engineering and math curriculum. Nelson introduced senior Senay Emmanuel, one of the “future engineers and leaders in aviation…being developed just down the street.”

Emmanuel said he and his classmates were excited to have Boeing facilities so close to the school. Raisbeck Aviation High School has relationships with the Museum of Flight and Boeing, which offers internships for students to learn about building airplanes, he said.

"This new facility is exciting for me and my classmates because we would love to work in a first-class facility like this as part of Boeing’s exciting future designing and delivering the 737 MAX and other airplanes that may come along," Emmanuel said.

By Dawsalee Griffin and Eric Olson 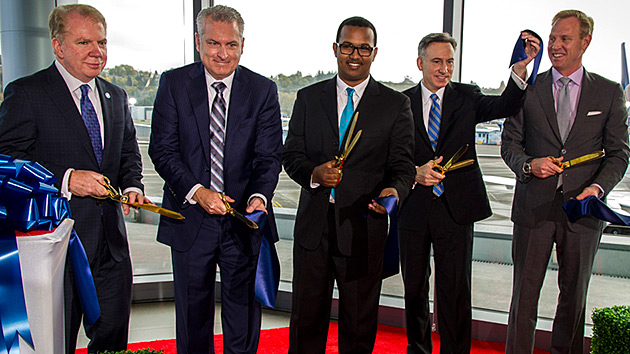 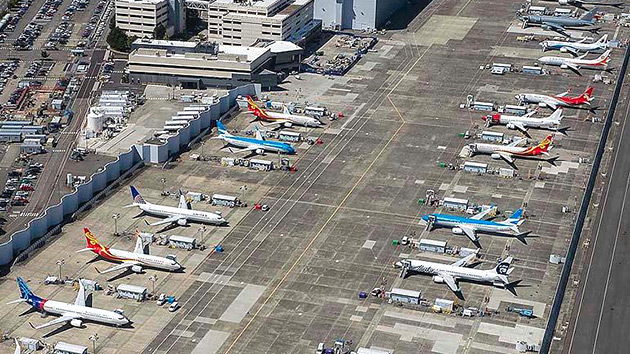 Airplanes fill the flight line near the Seattle Delivery Center (upper center) in this aerial view of construction at Boeing Field. The expanded facility enables an increasing production and delivery rate of 42 737s a month, up to 52 in 2018.