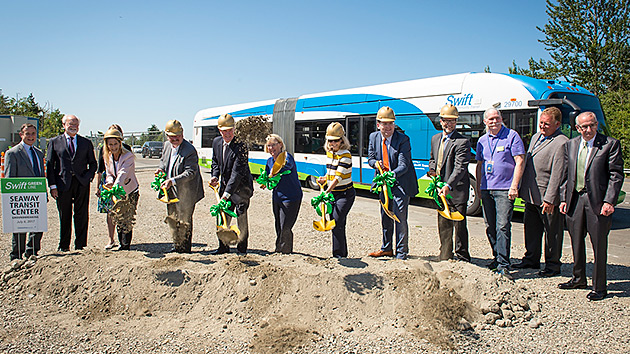 “Boeing has been a close partner with Community Transit since the agency began in 1976,” Lund said.  “Over the years as Community Transit’s service area has grown from Edmonds to Stanwood and Everett to Granite Falls, Boeing employees have relied on Community Transit to take them to work and home and everywhere in between.”

Lund, vice president & general manager, 777 and Everett Site, Murray and others used golden shovels to turn over dirt, while excavators nearby already had carved out a 100 foot-deep storm-water retention vault, measuring 300 feet by 20 feet

In 2019, passengers will be able to board express buses at Bothell’s Canyon Park and at Mill Creek for expedited rides on the planned Swift Green Line. Buses will arrive at the Seaway Transit Center, located at Seaway Blvd. and 75th Street, every 10 minutes.

Once the Swift Green Line begins its run, employees during peak shift change will be able to transfer from the buses, to waiting Boeing shuttles that will bring them onto the site and to their work location.

“The Seaway Transit Center and the Swift Green Line offer convenient alternatives for employees who otherwise would drive and park onsite,” Lund said.

More than half of the Swift Green Line’s $73 million cost will be funded by federal grants, said Murray, a member of the Senate Transportation, Housing and Urban Development Subcommittee.

“As a voice for our state in Congress, I'm proud to work with partners at the state and local level to connect our communities with safe and efficient transportation systems that meet the demands of a 21st century economy and address the ever-increasing congestion commuters are experiencing,” Murray said.

Emmett Heath, Community Transit’s CEO, said the Swift Lines will open access to 20,000 Boeing employees to get to and from work using either the Green Line or the already operating Blue Line, which connects Shoreline with downtown Everett.

“With buses arriving every 10 minutes on the Swift Green Line, you can throw your schedules away,” Heath said. “You are never late, just a few minutes early for the next bus.” 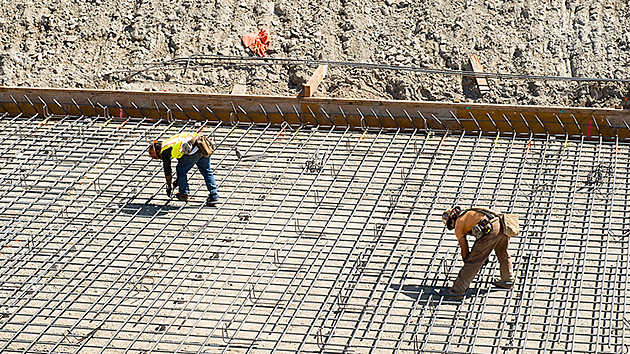 Excavators have already had carved out a 100 foot-deep storm-water retention vault, for the project.