Five years after its Boeing Seafair Air Show debut, the KC-46A Pegasus glided over Lake Washington again – this time with a trusted partner, the P-8A Poseidon. Both models soared through the sky last weekend giving Seafair attendees in Seattle, Washington, a chance to view the locally-built military aircraft in person.

“The Boeing Seafair Air Show is a great opportunity to showcase two of our premier Boeing Defense platforms,” said John Verniest, chief pilot for the KC-46 and P-8 programs, who flew the P-8A during the Boeing Seafair Air Show. “It’s an honor to participate in the event, and provide a display of the hard work the Boeing team has put into assembling these aircraft that support the U.S. military and its allies.”

Built in Puget Sound, the P-8A is a military derivative of the Boeing 737-800 Next-Generation model. Often called the sub hunter, with anti-submarine and anti-surface warfare; surveillance and reconnaissance and search and rescue – it is deployed around the world, protecting seas and securing borders.

Based on the 767 freighter airframe and produced in Everett, Washington, the KC-46A is a multi-mission aerial refueler designed to transfer fuel during flight. It also delivers data connectivity, and provides cargo, personnel and aeromedical transportation. The KC-46A features boom and hose-and-drogue systems with the capability to refuel all U.S. allied and coalition military aircraft compatible with international aerial refueling procedures. 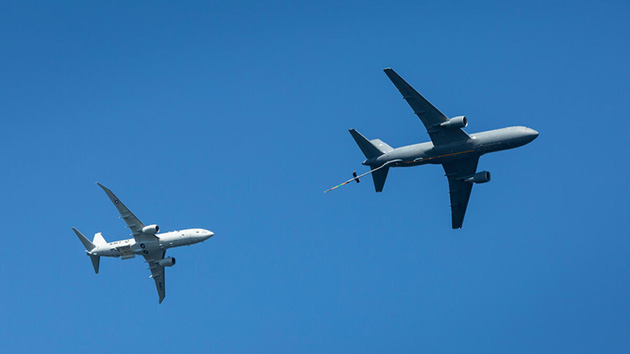 The KC-46A makes its way across the sky with the P-8A trailing behind it.

During the air show, both aircraft flew at a low altitude in refueling formation to the delight of the crowd viewing on land as well as from boats cruising Lake Washington.

“It was amazing to see the KC-46A and P-8A fly together, and truly special to share it with my family,” said Sara Trela, senior manager, KC-46 Remote Vision System, who has also served on the P-8 program during her Boeing career. “I’m grateful for the opportunity to show my kids the important product I have the honor to work on.”

Onlookers watched in amazement as the KC-46A made its way across the sky with the P-8A trailing behind it. The KC-46A flew with the refueling boom deployed to showcase the in-air refueling capability. In the near distance, with its weapon bay doors open, the P-8A paced its way.

Among the crowd was Jignasa Lakkad, production engineering manager for the P-8 Program.

“I’m proud to support the P-8 program and see the aircraft fly today at the Boeing Seafair Air show,” said Lakkad. “It’s great to see how involved the company is in the community and how we are inspiring the next generation of engineers.” 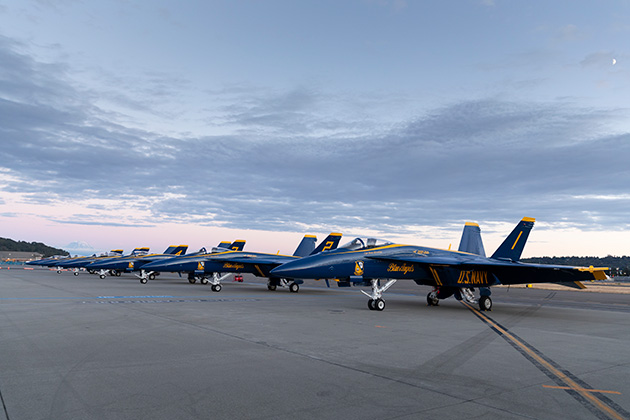 In addition to the KC-46A and P-8A, other military and civilian teams participated in the air show, including the U.S. Navy Blue Angels. The team performed an array of acrobatics while maneuvering Boeing-built F/A -18 Super Hornet jets.

“Flying in front of this community is always special,” said Troy Larson, deputy chief pilot, KC-46 program. “We know families are watching and the kids are excited to see the planes up close. The public doesn't get to see these military airplanes often and this is a unique chance to show the products we take so much pride in.”