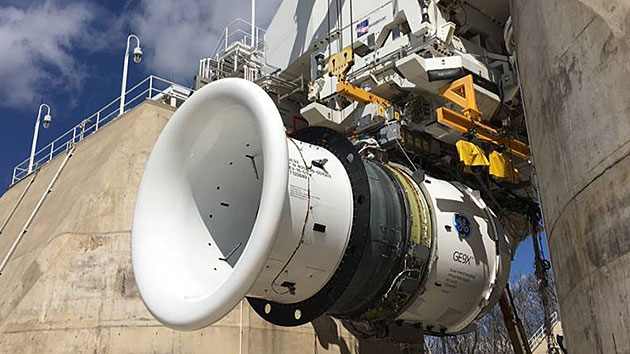 The engine that will power the 777X — the GE9X — began ground testing recently at GE Aviation’s Peebles Testing Operation in Peebles, Ohio.

The engine that will power the 777X — the GE9X — began ground testing recently at GE Aviation’s Peebles Testing Operation in Ohio, a significant milestone in the development of the engine and the program.

“The results from the initial engine run are very positive, and we look forward to learning more about the engine’s operability and performance capabilities during the testing of the first full engine,” said Bill Millhaem, general manager of the GE90/GE9X engine programs at GE Aviation.

Maturation testing of the GE9X began five years ago and has progressed from component level all the way to the first full engine to test. First full engine testing brings all the GE9X technologies together to demonstrate their operability as a complete propulsion system, as well as provide early information on the engine’s aerodynamic and thermal characteristics.

"We would like to convey our congratulations to the GE team for its achievement of this milestone,” said Bob Feldmann, Boeing 777X vice president and general manager. “GE's commitment to technology maturation throughout the GE9X development continues to deliver results for the 777X program. We look forward to working together with GE to deliver this great airplane to our customers.”

“To have a great airplane, the engine and airframe need to be designed and optimized together,” said Joe Dirusso, 777X propulsion manager. “The Boeing and GE teams worked as one team to design the best engine for the 777X. It was always clear that everyone was working toward a common goal of doing what’s right for the airplane.”

Production in Washington State is set to begin in 2017.