Each year during National Engineers Week, or E-Week, Boeing honors and celebrates the members of its engineering and technical community, and all that engineering accomplishes.

At the same time, Boeing’s engineers are reaching into their communities to ensure the next generation of STEM leaders are finding the inspiration and encouragement they need to pursue the careers of their dreams.

In Washington state, more than 250 Boeing employees volunteered to host groups and conduct STEM outreach to local students during E-Week activities. Throughout the formal week of Feb. 18-22, and the weeks that follow, they will interact with more than 70 Puget Sound classrooms, reaching as many as 8,000 local students.

“I didn’t know what engineers did until I took a course about it as a sophomore in college,” said Jessica Jones, a tooling engineer in Boeing’s additive manufacturing facility in Auburn, Wash. who volunteered during E-Week. “So reaching out to those in middle school, high school, and getting them aware of it is just providing inspiration for the younger generations.”

“It’s pretty cool having people tour around the facilities that I see every single day,” said Jeffrey Gabeau, a Boeing design engineer. “You don’t realize how fortunate you are that you get to do what you do until other people come in and tour the area and are amazed by what you do.”

“I think Boeing really cares about the future with putting so much into Engineering Week,” said Brianna Nord, a process engineer. “It’s really cool to work with the kids to get them interested. So hopefully a lot of the kids are growing up and wanting to be engineers themselves.” 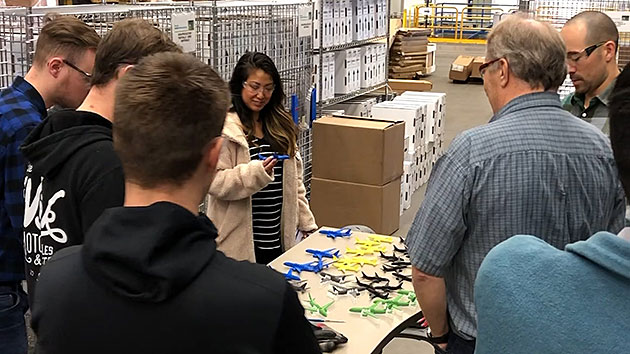