Taking to the skies on a special Alaska Airlines flight, 150 people including STEM students from Washington, women in aviation and Boeing executives were whisked away to the annual Oshkosh, Wis., air show last week.

The flight was part of a partnership between Boeing and Alaska Airlines to highlight women in aviation and to promote science, technology, engineering and math (STEM) education for all. Women make up about 6.4 percent of commercial airplane pilots in the U.S., according to Women in Aviation International, a nonprofit group dedicated to encouraging and advancing women in aviation careers.

“It’s truly an amazing experience,” said Kim Pastega, Boeing Defense, Space & Security Operations vice president of Fabrication and one of the Boeing executives who accompanied the students. “It’s been such a long partnership, and making sure that we’re inspiring the next generation of aviators and doing it together is really a great thing for both of us.”

Boeing recently published its annual Pilot and Technician Outlook report, which found that 617,000 pilots and 679,000 technicians will be needed over the next 20 years to support the world’s growing airline fleets. Partnerships like the one it has with Alaska Airlines are part of the company’s efforts to fill that need.

Thousands of spectators cheered when the 737-900ER (extended range), piloted by Capt. Debbie Waingrow and First Officer Patricia Tomich, touched down at the EAA AirVenture Oshkosh show. Once there, students attended workshops, talked with experts in the aviation industry and enjoyed aerial displays above the festival grounds.

Jo’Nathan Alderson, a student at the Museum of Flight’s Apprentice Program in Seattle, said the opportunity was inspirational.

“It really gets us involved in the aviation community and opened up to the world of aviation, giving me direction with where I want to go in life,” he said.

The airplane’s livery features the words "100 years strong" painted boldly on both sides of the fuselage to salute Boeing’s centennial.

“Looking at the airplane with our logo, with 100 years, it just makes me so proud to be part of this industry, to be part of The Boeing Company,” said Fariba Almadari, vice president of Boeing Commercial Airlines Marketing, who also made the trip.

She added that seeing the students’ enthusiasm was encouraging and providing them with opportunities to explore STEM education is an investment both Boeing and Alaska are eager to make.

“You can see how many young people are fascinated and interested in aviation,” Almadari said. “It’s very inspiring knowing these young people will play a part in the next 100 years.” 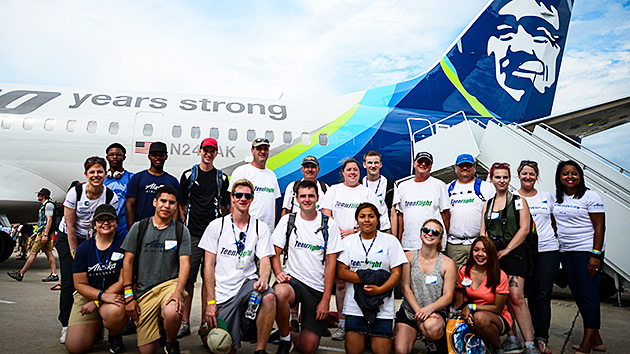