Brenda Diettrich comes from what she describes as a “total soccer family”. Diettrich and her husband both grew up playing the sport, and both of her daughters played in college.

Today, Diettrich serves as the Olympia School District’s Robotics coordinator, responsible for overseeing all levels of For Inspiration and Recognition of Science and Technology (FIRST) Robotics for the district ranging from the FIRST Lego League to serving as head mentor for a FIRST Robotic Challenge team. When she learned she was selected as the inaugural Reign FC STEM Honoree of the Match Presented by Boeing, she was overjoyed.

“The whole day, I was holding back tears of joy and excitement,” says Diettrich. “Being a soccer lover and being honored on the pitch of a Reign game was so exciting. It meant the world to me to have family and friends there to get a glimpse of what I do and at the Reign game, no less.”

Boeing and Reign FC, the National Women’s Soccer League Team (NWSL) based in Tacoma, Wash. launched a new partnership this year. Reign FC game-day kits (jerseys) all sport the Boeing logo on the back, and members of the Boeing Global Engagement team help select the education-focused groups highlighted throughout the season.

As a mentor to so many students just beginning to explore Science, Technology, Engineering and Math (STEM) fields, Dietrich says she loves watching them discover all that they are capable of. “We want them to see that, yes, they can make and program a robot, manufacture metal boxes, program and fly drones and more,” she says. “I also want to add, these are the skills that employers want. STEM jobs provide living wages. These jobs are fun and meaningful.”

This season, the STEM Honoree of the Match presented by Boeing has been awarded to numerous education-focused organizations and individuals in Thurston, Pierce and South King counties. 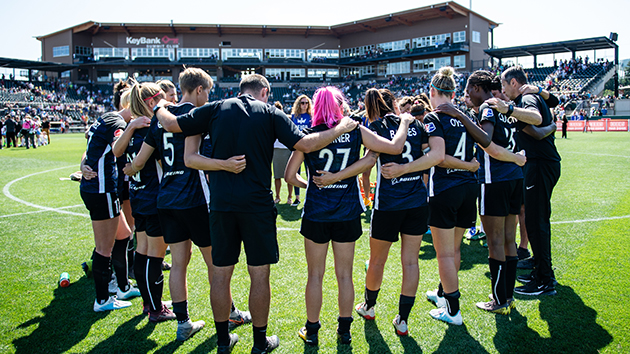 Reign players sport the Boeing logo on the back of their game day jerseys.