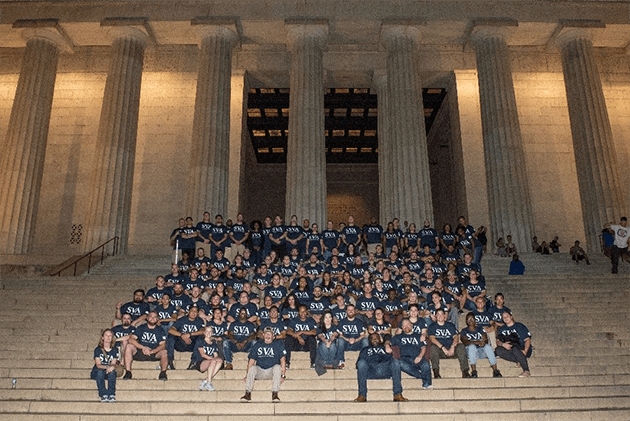 The Student Veterans of America engages with policymakers in DC and on campuses across the country to shape the national landscape for student veterans. (Photo taken prior to COVID-19)

courtesy of Student Veterans of America

Student Veterans of America (SVA), an organization supporting the academic, professional and personal development of veterans, selected Boeing as its Partner of the Year. The announcement was made during the SVA’s virtual National Convention 2021 — the largest annual gathering of Post-9/11 veterans in the world — on February 20.

These awards recognize the contributions of SVA partners like Boeing that support the research, operations and programs benefiting nearly 1,500 SVA chapters and more than 750,000 student veterans across the country. As part of SVA’s advocacy work, it helped conceive, and pass, the first major update to the GI Bill in a decade, known commonly as the Forever GI Bill. This bipartisan legislation impacts the lives of approximately 1 million students, distributing more than $12 billion in benefits annually.

“Our Partners in Excellence awards recognize companies and organizations that empower student veterans to lead and live their best lives,” Student Veterans of America National President and CEO Jared Lyon said. “Student veteran success is enhanced though dedicated teams such as The Boeing Company that prioritize support for our nation’s most talented college students and SVA alumni.”

“We are immensely proud to sponsor SVA’s National Convention for the second year in a row to help student veterans gain access to the resources they need for success — things like networking, mentoring and professional development opportunities,” said Stan Deal, Commercial Airplanes President and CEO. “As a company, we are proud to serve and honor our veterans, current service members and military families.”

Boeing’s partnership with SVA is part of the company’s long-term commitment to veterans and their families. In 2020, Boeing announced a $14.2 million charitable grants package to fund veterans workforce transition services and recovery and rehabilitation programs through 2021 and beyond.