Just like signing days for athletes, STEM Signing Day celebrates high school seniors who formalized their commitment to pursue science, technology, engineering and mathematics (STEM) at some of the state and country’s top technical schools, colleges, and universities.

This year, more than 600 students in 16 states across the country signed a letter of intent addressed to the institution or program where they plan to pursue a post-high school credential, including technical programs and two- and four-year colleges and universities. A total of 46 Washington students were honored as they signed their letters, a demonstration of their dedication to STEM fields. Due to the COVID-19 pandemic, the event, on April 29, was virtual for a second year, with Boeing and community leaders, elected officials, the local Boeing Black Employees Association president, and a past STEM Signing Day honoree individually recognizing the students and sharing their plans for the future.

“What excites me about being involved in STEM is being able to create meaningful innovation that will improve the way of life and solve the challenges and problems we face today,” said Hillary Berkoh, a senior at Mariner High School who will be studying Computer Science at the University of Washington.

Boeing President and Chief Executive Officer David Calhoun congratulated and encouraged the students during the event’s broadcast: “We connect, we protect, and we explore the world and beyond. It’s a challenge that’s unlimited. It’s a challenge that gets a lot of notoriety and excitement built everywhere around the world in societies around the world. Ultimately it is STEM graduates that deliver on the promises that the world and the universe offer to humanity. I don’t think it gets any bigger or any more exciting.”

"We are very excited to honor these Washington students," said Boeing Western Region Global Engagement leader Sam Whiting. “These students are a true inspiration and we look forward to the wonderful and innovative accomplishments they will achieve in the future.”

By Catherine Rudolph and Eric Olson 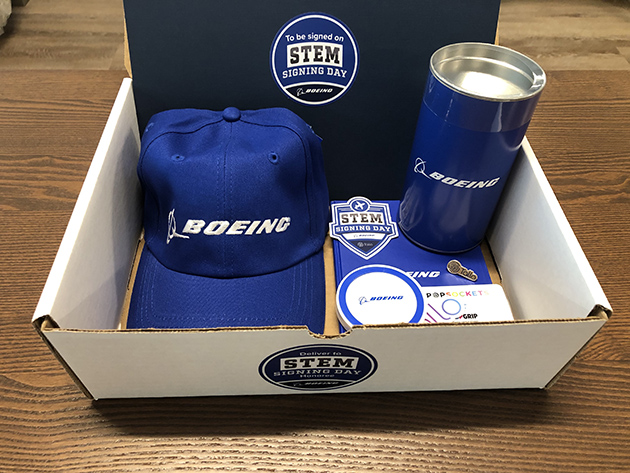